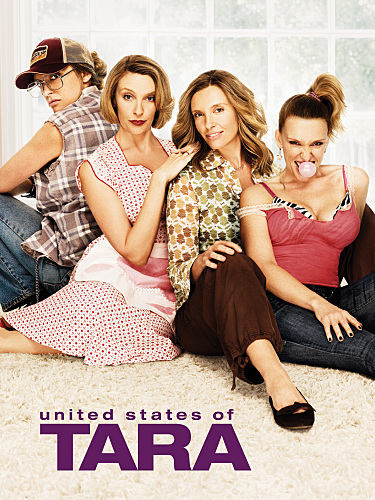 So I know Showtime has always been the poor, neglected stepkid compared to HBO, but in the last few years, if you haven’t noticed, Showtime has totally been kicking HBO’s butt with quality shows.

It started with “Weeds,” and then “Dexter” and “Californication,” and last season I discovered two awesome and totally subversive programs that Showtime started airing.

Lucky for me, they both started Season 2 on Monday. “United States of Tara,” starring the fabulous Toni Collette as Tara, is about a woman with multiple personality disorder and her attempts to cope with life. She’s marrying to Aidan from “Sex in the City” (John Corbett), and they have two delightfully weird kids, the out-there gay Marshall and the blonde, sarcastic Kate.

Then there’s Tara’s  crazy sister, too. The show does take a serious disorder and make it funny, but it’s brilliantly wicked and it does have some serious moments. Highly, highly recommend.

“Nurse Jackie” started back up this week, too. It’s also terrific. Edie Falco is a totally different woman from Carmela Soprano; she’s an ER nurse who was cheating on her husband with a pharmacist. There’s the usual weird cast of characters (though they seemed to have dropped the gay male black nurse this year, which is a shame), but this is totally Edie Falco’s show.

“Nurse Jackie” isn’t as good as “Tara,” but it’s still pretty damn entertaining. If you have Showtime, check them out. If you don’t, well, it’s worth the 8 bucks a month just for these two shows.

**So “Parenthood” continues to get better and better, as does “Modern Family.” Watched both Wednesday night; I’m so glad “Parenthood” is starting to give its characters dimensions and layers, though Craig T. Nelson still seems to have nothing do do as the Grandpa. I love that Adam Braverman and his wife break into their daughter’s laptop, then go over to her secret boyfriend’s house.

They’re doing a really good job with Erika Christensen’s character; the totally conflicted working mom, but Lauren Graham’s Sarah is kind of over the top. I want her barista boyfriend to come back.

Anyway, I thought this week’s episode was the best one yet, especially when so many people keep trying to talk to the teenage boy and his “showering” problem.

I SO don’t miss being a male teenager.

***Finally, ESPN’s 30 for 30 series has picked back up again, and picked up right where it left off in being awesome. Last week was the premiere of “Winning Time: Reggie Miller vs. the New York Knicks.”

As fantastic as I remember those playoff wars between the Knicks and Mr. Alien (Miller) were, the movie brings the feelings back even stronger. Really well-done film, with great interviews and memories from all the key players.

Couple thoughts after watching the movie:

1, Spike Lee really was a perfect foil for Miller.

2. Anthony Mason was truly one of the dumbest basketball players of all time. Seriously.

3. Mark Jackson had the funniest stuff in the movie, talking about how he used to fire Miller up by telling him all the terrible things the NY media was saying about him. Also, Mark Jackson was a damn good player, and I tend to forget that.

Anyway, it’s a terrific movie, running on ESPN and all its 47 channels throughout the month.