Thoughts on Cobain’s widow. An idea I wish I’d had. And what really not to say to an NFL prospect 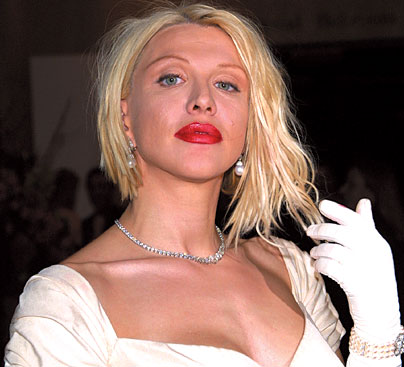 I never think about Courtney Love.

I don’t imagine many people do anymore. But completely randomly, I caught her on Letterman for a few minutes last night. She seemed calm, mature and pretty well-spoken. Apparently she’s all cleaned up, no more drugs or booze, just a regular old rock and roll woman.

Which shocked the heck out of me. She’s had quite the interesting life in the public eye the last 20 years or so, playing so many different roles. First she was the crazy woman married to Kurt Cobain. Then he killed himself, and my whole generation saw her as the grieving widow, and some looked to her to, I don’t know, carry on Kurt’s legacy. (Of course, now Nirvana fans hate her because she’s blocked the release of some of the band’s unreleased music. But that’s a whole ‘nother story).

Then Courtney became a star in her own right with her band Hole. Then she became an actress for a while, and actually was really good in “The People vs. Larry Flynt.” (I love that movie. I was just talking about censorship on here yesterday, and man, if that movie isn’t a freaking Valentine to the First Amendment). Then, the downward spiral really got bad, as she became a drunk, strung out on drugs, and had years of really odd and embarrassing behavior.

I figured that was the end of her, not realizing that rehab is the last great hope of a celeb’s public life. Maybe she’s cleaned up for good now. She seemed really lucid and analytical talking to Dave last night.

It’s funny how we root for celebrities to stay clean, isn’t it? It’s not like we know them. I never even liked her or her music, but for some reason I hope Courtney Love makes it this time, and stays clean and sober.

It would, at the very least, give us something happy to think about when remembering what a great band Nirvana was.

**OK, so here’s a dirty little secret about sportswriters: We get really mad and jealous when someone else writes a column off a brilliant idea they had. Sometimes you sit there and think, man, I SO wish I had thought of that first!

That’s what happened when I saw Orlando Sentinel scribe Mike Bianchi’s column the other day. In Charlotte to cover the Magic-Bobcats series, he drove to Chapel Hill and went to the Dean Dome, the University of North Carolina’s home arena.

And then he walked around for hours wearing a J.J. Redick jersey. J.J., of course, played for Duke. Bianchi was actually asked to leave the arena, and he was heckled for hours.

The photo may be the best part. Click the link if only to see the photo. Fabulous.

**Finally, NFL general managers are supposed to ask all kinds of probing, insight-seeking questions of the kids they’re about to draft. It’s smart business; you’re going to play these 20-something athletes millions, you want to know everything about them.

I can’t imagine why that might bother a kid.