An amazing ESPN movie about the O.J. chase. An abominable Game 7. And Sarah, oh Sarah.

Before 9/11, it was my generation’s “Where were you when it happened?” moment.

June 17, 1994. Early evening. My father and I are watching Game 5 of the New York Knicks-Houston Rockets NBA Finals series, and all of a sudden, NBC News breaks in and shows us O.J. Simpson, in a white Ford Bronco, fleeing police on a California highway, with a gun to his head in the backseat.

It was unbelievable, the first live reality TV show. It changed everything about how the media covers news, about how we see celebrities, and about how voracious our appetites are for controversy. (Side note: Can you freaking imagine if the Internet was around during the O.J. trial/chase? We think the hysteria was nuts then, it would’ve been nothing compared to what it would be now!)

ESPN’s “30 for 30” documentary series has been lavishly praised by me before, but they’ve outdone themselves with Wednesday night’s “June 17, 1994” film. I cannot recommend it strongly enough.

That was a historic day in sports, with so much going on, as the movie details. Arnold Palmer played his last round of golf in a major. The New York Rangers held their first Stanley Cup parade in 54 years. The World Cup started in the U.S. The Knicks and Rockets played Game 5.

But of course, O.J. was the biggest thing of all, and the movie focuses on him. The brilliant touch of the director, Brett Morgen, is that there are no talking heads or commentators looking back on the day from 16 years later; the whole one-hour movie is comprised of clips from that day.

There’s some fantastic off the air footage of NBC’s Bob Costas and others, completely flummoxed about how to handle this situation. Hilarious moments, like when NBC’s Tom Brokaw, while talking about O.J. pulling up to his Brentwood house, slipping in the score of the Knicks-Rockets game for fans.

But the best part of the movie, for me, anyway, was the long excerpts of the phone conversation between O.J. and LAPD detective Tom Lange. Lange pleads with O.J. to throw the gun out the car, while Simpson cries and begs to be allowed to end his life.  It’s amazing footage (here’s a link to some of the transcript of the call).

I immediately ordered “June 17, 1994” on DVD from Amazon after seeing this film. I want to be able to answer my grandkids when they study the O.J. Bronco chase in history class one day by saying “Watch this. This is what really happened.” 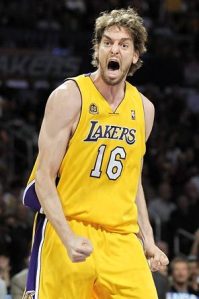 **I’m not an NBA fan. I frankly haven’t cared much about these playoffs, save for a few teams that I like watching (Phoenix) and of course, my man LeBron James.
I’ve watched very little of the Finals, like, maybe 10 minutes total. But still, as a sports fan and a sports journalist, I felt obligated to watch the second half of Game 7 between the Celtics and Lakers.

Good God, what an abominable display of basketball. Missed shots, bad foul shooting, bad passes, everything. I know Game 7s are sometimes like this, because both teams are so nervous and so amped up. But this was, like, Knicks-Heat mid-1990s bad.
I couldn’t root for either team, because I hate Kobe Bryant (the unconvicted rapist) so much, and thanks to my New York DNA, I can’t ever really root for Boston.
I guess I should congratulate the Lakers, but my heart’s not into it. Damn you, Kobe.

***I try. I really, really try not to pay attention to Sarah Palin. But it’s hard sometimes, especially when three of my friends email me the YouTube link below, her interview with Fox’s Bill O’Reilly Tuesday night.

Seriously, can someone translate what she’s saying for me? I watched it twice and I truly think she’s a robot just spouting words when people push buttons on her stomach.

I ripped O’Reilly the other day, but I have to give him some props here: He seems as confused by Palin’s unintelligible speaking as the rest of us. And he does try to press her a little: