Saw “Toy Story 3” last night with the wife.
Loved it. Thought it was the equal of, or perhaps greater than, the first two movies in the series.
And it occurred to me, as I thought about all the recent Pixar movies I’ve loved, from “Shrek” to “Up” to “Finding Nemo,” that there’s one common thread linking them:
The stories all have a tremendous amount of heart. It’s evident in the writing, in the acting (the voices of Don Rickles, Wallace Shawn and Estelle Harris are amazing in this one), and in the morals.

I’m finding that Pixar movies are so much better written than most other movies today, and yes, I might be the only person in the world who comes away from one of their flicks talking not about the visual brilliance, but the words.

But in telling this story of a young boy growing up and going to college, while his toys stay behind, Pixar takes a theme we all can relate to (growing up and outgrowing childhood things, and friends) and weaves a beautiful story.

Go see this movie. As soon as possible. It got the highest score I’ve ever seen on Rottentomatoes.com, 98 percent (and I want to meet the 3 movie critics who didn’t like it).

I wish some of Hollywood’s top “real people” storytellers would take a lesson from the genius writers at Pixar.

**There are lots of reasons to love and respect Rafael Nadal, which is why it’s so hard to muster up anger toward him when my idol Roger Federer plays him (six more days till Nadal-Federer IV on Breakfast at Wimbledon. Please, please, please give us that on the Fourth of July.)

One reason is that Nadal does things like this: During every tennis Grand Slam, for the last several years, Nadal writes a daily blog for The Times newspaper in London. He takes readers questions, talks about how he’s feeling, all that good stuff. Does he really write it? Who knows. But the fact that he does it to keep connected to fans during a tournament is pretty cool. Here’s a link to Nadal’s blog. 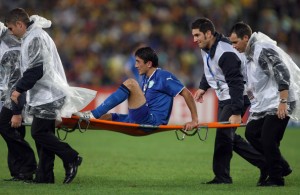 **The best writers are the ones who watch the same events you do, then ask the questions in print that you’re wondering.

Which is why Joe Posnanski had me cracking up the other day during the U.S.-Ghana World Cup game. I’ve always thought it was ridiculous how, when a player in soccer looks to be really hurt, they have four guys come out and carry him off on a stretcher. Of course, the guy’s not really hurt, because he seems to always re-enter the game like, five minutes later and runs like a gazelle.

Joe Pos saw it happen again with a Ghana player Saturday and said:  “You think those guys with the stretchers get mad when they carry a guy off and he runs right back on? It’s like: “I just CARRIED YOU.”

I think those stretcher-bearers should strike. Or at least, test these fakers when they get to the sideline. “Oh yeah, you’re really hurt? Well, then, I’ll just kick you right HERE to see if it hurts.”

Or how about they pull the old “get in the car” trick, where when the guy is about to get on the stretcher, they pull it away and make him roll a few feet more? Keep doing that and see if he can chase the stretcher to the sidelines, while the bearers yell “No really, this time I won’t move it. Get on already, we’re delaying the game!”

One response to “The genius of “Toy Story 3.” Rafa’s cool blog. And stretcher-bearers dissed at World Cup”