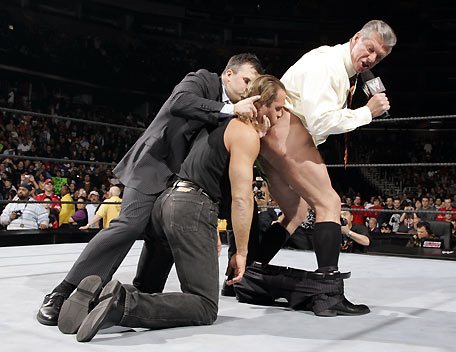 When I first heard that Vince McMahon’s wife Linda was running for U.S. Senate, I thought two things immediately:

-This is a complete joke, just another rich person think they’re qualified to help run our country, and

Well, she probably still won’t became the junior senator from the state of Connecticut, but she’s gotten a lot farther than I would’ve thought, and was the center of a Page 1 story in the New York Times Friday.
McMahon is the former CEO of World Wrestling Entertainment, a wildly successful wrestling company (sorry, they call it “sports entertainment” now) that has so many skeletons in its closet, you can hardly count them all.
Under Linda and Vince McMahon’s stewardship, the WWE has seen dozens of wrestlers died from steroid-related deaths. It has seen wrestlers die in the ring. It has had steroid scandal after steroid scandal. It has been accused of grinding up and spitting out its top performers, throwing them out and not giving a damn about their health and medical problems. (I learned a ton about the WWE while interviewing dozens of former wrestlers while writing about the Chris Benoit murder-suicide in 2007).
On the air, McMahon’s product has managed to offend and degrade women, gays, Hispanics, Arabs and just about every other minority group in America.
When I heard she was running, I figured all the Democrats had to do was show some of the WWE’s most offensive clips (they’re all over YouTube) to Connecticut voters, and she’d be cooked.
But then McMahon started spending her millions, and Democratic nominee Richard Blumenthal was caught lying about his Vietnam experience, and we’ve got a race now. Blumenthal still leads by double digits in most polls, but I have to begrudgingly give credit to McMahon for hanging in there this long.
It is truly, truly frightening that she’s as close to a Senate seat as she is, though. This is a woman who helmed a corrupt, harmful company that broke laws for two decades.

Then again, maybe she’s perfectly qualified to be in the Senate.

**So you know, since it’s mid-July, I figure it’s time for a little hockey. Nah, even I wasn’t thinking about the frozen indoor sport until SI.com’s Allen Muir’s column Friday reminded me of this incredible moment from 2000. Dallas Stars defenseman Darryl Sydor was seriously hurt on this hit in the Stanley Cup Finals, but watch how he literally crawls toward the front of the net to try to help his team. It was an amazing display of courage. And it was almost routine for a hockey player; they’re that tough.