An incredible tennis match I hope you saw. And the NFL is back, at last 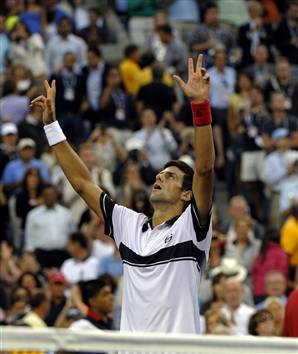 I know not all of you who read this blog are tennis fans. That saddens me (kidding), but I know it’s true.

But I have to spend a few minutes this morning talking about Roger Federer and Novak Djokovic’s U.S. Open men’s semifinal Saturday. Unbelievably dramatic, incredibly high-quality of play, and 23,000 screaming fans made it an unforgettable match.

As a huge Federer fan, I’m still a little saddened this morning. It really felt like the end of an era when he lost to a younger, more explosive player. I don’t know why this loss feels different; Fed has lost before the finals in three straight Slams. But this was the U.S. Open, where Roger has been the king for so long.

**Football’s here. I know people in the South where I live think football really started last week, when the college season kicked off.
But for me, today at 1 p.m. is an absolute beginning, and a joy. The NFL is finally back, and I’m excited.

Excited to see whether the Saints can repeat. Excited to see if my beloved Jets can reach the Super Bowl (they won’t. It’s not going to happen in your lifetime, Lewis! Keep telling me that if things go well this season, dear readers.)

Excited to see if I can have a great fantasy team this year (I’m strong at wide receiver and quarterback, but my running backs are a little weak. Jahvid Best, I need a big rookie year out of you, young man).

Man I wish the Jets played today, but alas, gotta wait until Monday night. Headed over to my favorite sports bar, Houligan’s, in a couple hours, and it’ll be like a family reunion: I’ll see people I haven’t seen since the end of last season, and we’ll pick up right where we left off.

(A funny aside: Every once in a while, as happened yesterday, my wife and I will be out in a store and someone will recognize me as the Jets fan at the bar, and we’ll start talking about football for a few minutes. This amazes her.)

Best of luck to whoever your favorite NFL team is this season. Unless you’re like my friend Ali Taber who roots for the Patriots; then I say bad luck and boils to all on her favorite team.

Or if you’re my friend Buddy Shacklette, who roots for the Dolphins. He gets bad luck and double boils.

But the rest of you? Best of luck.

And now, Jets coach Rex Ryan with his immortal closing line, that I’ll remember forever: (You can skip to the last 15 seconds if you only want the best part. And the language is Not Safe for Work.)