Fearing the worst on Election Day. And congrats to the World Champion Giants

Happy Election Day everyone. I’m saying that now because by the time the day is over, I as a liberal Democrat won’t have much to be happy about.
My party is going to be slaughtered today.
It’s only a matter of how badly. I truly don’t think the Republicans will take back the Senate, but if it’s close, like 51-49 or 52-48, I worry that Joe Lieberman and Ben Nelson will decide to become Republicans and take over the Senate for that party.

It’s going to be bad, and I’m preparing myself for that. While I remain pissed at my party for not doing nearly enough with 59 Senators for two years, and at Harry Reid for being such an inept leader, I realize these things go in cycles, and the economy sure as hell hasn’t helped Obama or the Democrats.

But I am a political animal, in good times and bad. So I will watch the returns tonight on CNN, my favorite cable network (Wolf Blitzer’s beard inspires and frightens me). I will hope against hope that Russ Feingold of Wisconsin, one of the last true liberals in the Senate, will somehow find a way to get re-elected.
I will watch Meg Whitman get trounced, rightfully, in the California governor’s race. I will see Christine O’Donnell fail, and maybe even Sharron Angle too, a couple of nutjobs who should be nowhere near the legislative process. I will see if in my state of Florida, Charlie Crist, who I reluctantly voted for (the Democrat, Kendrick Meek, simply cannot win) can keep Marco Rubio out of Washington.

Then it’ll be over, the dust will settle, the pundits will opine, and life as we know it will go on pretty much unchanged. 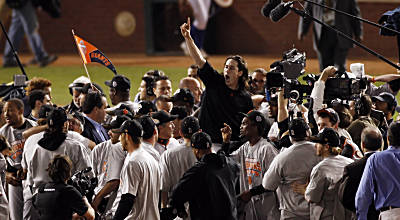 **Everyone who picked the San Francisco Giants to win the World Series back in April, please stand up. Sit down, Mr. Barry Bonds.
Gotta say, it’s refreshing how many new winners we’ve gotten in baseball these last 10 years. San Francisco, who had never won since the team moves from New York, hadn’t won in 52 years as a franchise. Just in the last few years we’ve had the White Sox winning, the Red Sox, the Phillies, and the freaking Florida Marlins. I love it when championships are spread around.
This Giants team truly seemed to have very few superstars, not a whole lot of offense, but some seriously awesome pitching.

And that’s what wins you World Series. I also love any team that gives us more Journey music, since I freaking love Journey. Here’s Steve Perry and 45,000 of his closest friends singing “Lights’ before Game 2 of the World Series: