Elizabeth Edwards, a woman of grace. And “Men of A Certain Age,” back and great again

I met Elizabeth Edwards on two occasions in the winter of 2003-04.
I was working as a volunteer for the John Edwards for President campaign in New Hampshire, going up on weekends to knock on doors, stand in the freezing cold and sing songs (“E-DW-ARD-S, oh yes, John is the best!” Seriously, that was our song).
One day after a rally,  the host family I stayed with while in Concord called me over, said someone wanted to meet some volunteers. And there, standing in the middle of a group and holding a hot chocolate, was Elizabeth Edwards.
She was smiling so brightly; I’ll always remember her enthusiasm and gentle smile.
I shook her hand, she called me by name (each volunteer got that courtesy from her), and she thanked me for coming up to New Hampshire to help her husband get elected President.
I spoke to her once more, a few weeks later right before the primary, and once again, her warmth cut through the freezing Manchester night.
She was a remarkable woman, brave in her fights against cancer, resilient in the face of the unspeakable tragedy she and John endured when they buried their own son, Wade.
Some will remember Elizabeth Edwards for sticking with John even after his infidelities, and even after most of the rest of us fled and wondered how she could stay with him. Others will recall the salacious details in a campaign book released last year.
I will remember her smile, and gentle nature. And how remarkably courageous she was in the face of so much pain.
Rest in peace, Elizabeth Edwards. Your smile remains with us, always. 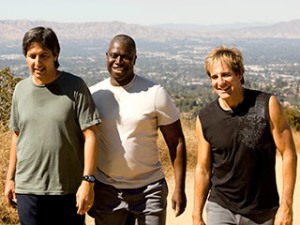 **One of my favorite discoveries last year was the TNT show “Men of A Certain Age.” I caught on halfway through the season, and was shocked at how good it was, and how much I liked it. I’ve never cared for Ray Romano, never found him funny at all. But he’s really good in this show, as are Scott Bakula and Andre Braugher.
It’s a very well-written show, with flashes of humor and drama and all kinds of good acting. It just started its second season, and you haven’t missed too much if you start watching now.

Definitely worth your time. TNT, Monday at 10.