Finally: You can ask, they can tell. And some thoughts on the Coen brothers

Well it’s about damn time.
“Don’t Ask, Don’t Tell” was officially murdered in the U.S. Senate Saturday, 17 years after its awful birth.
Remarkably, several Republican senators, and Joe Lieberman, who for one day is back in the good graces of Democrats, actually agreed that a person’s sexual orientation has absolutely no bearing on his or her ability to serve as a soldier.
The repeal of Don’t Ask, Don’t Tell is a stain lifted off the collective conscience of this country, which denied a civil right to patriotic Americans who wanted to serve, who were desperate to serve, but were kicked out of the armed forces, or never allowed in, because of their sexual orientation.
It is a disgrace that this policy was allowed to go on for so long.
But now maybe, just maybe, this is one more barrier broken down for gays and lesbians, and one more exclusionary tactic gone to the dustbin of history.
Finally, Congress has done the right thing.
Of course, 10 minutes earlier Saturday, they killed the DREAM act, which would’ve let children of undocumented immigrants follow an arduous path to citizenship.
So, you know, we’ve still got an awful long way to go. 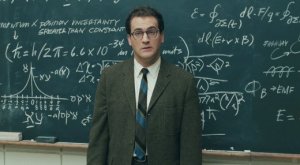 **I’m a huge fan of the Coen Brothers’ movies. I think Joel and Ethan are brilliant, creative, and devilishly funny. “Fargo” is in my all-time top 10, I loved “No Country for Old Men” and “O Brother, Where Art Thou,” and most of their other films like ‘Big Lebowski” and “Raising Arizona” are fantastic.
But sometimes, man, they jut completely lose me. A few of their films, and I’ve seen just about all of them, leave me totally baffled and empty. “Intolerable cruelty” was awful. “Ladykillers” was garbage.
And Saturday, I finally saw “A Serious Man,” their 2009 flick that I’d heard wonderful things about.
P-U. It stunk. I had absolutely no idea what was going on with that movie; the whole first hour I kept thinking, “OK, it’s the Coens, it’s got to be going somewhere.”
But it never did.
It was just a big, stinking mess. Richard Kind was in it, but for like 5 minutes. The plot was all over the place. I don’t know, maybe it’s me; I just looked at rottentomatoes.com and 89 percent of critics loved this movie.
I couldn’t wait for it to end. But you can bet I’ll be seeing the Coens’ “True Grit” this winter.
They don’t make two bad movies in a row.