The amazing Butler gets to the Final 4. An etiquette question. And a very cool then and now photo exhibit 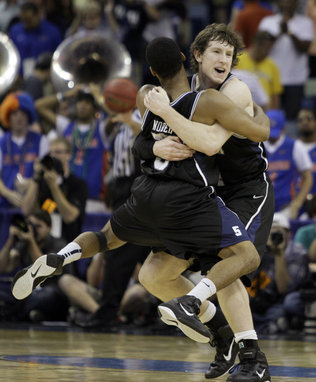 God I love Butler. I wish I went there today. I want to go buy a Butler hat, T-shirt and 3-subject notebook with the Butler logo.

My goodness, those were two fantastic NCAA Tournament games Saturday.
And I don’t know that I’ve ever been more impressed by a college basketball team than I am with Butler.
Last year, they thrilled me all the way to the championship game, when I finally had to root against them since they played Duke.
This year, they’ve been must-see TV again, and again they’ve somehow made it to the Final Four.
Non-college basketball fans, take note: This is an incredibly rare thing, a school like Butler making it to the Final Four two straight years.
The Bulldogs are so much fun to watch play, they’re coached by a 34-year-old named Brad Stevens who could name his next job right now, and they play the game the right way.
Butler has no superstars; they just have scrappy, hard-working kids with talent like Shelvin Mack and Matt Howard.
They’re not flashy, and usually in the second half, like Saturday against Florida, they’re down and have to make a comeback.
For hoop fans like me, they’re a joy to behold. That a powerhouse could be built by a small school in Indianapolis (and they certainly can no longer be called a “Cinderella”) is so wonderful.
Butler, in the Final Four. Again. Sensational. It’s why we watch this Tournament every year, and why it’s so sweet to see stories like this unfold.
I hope they win the championship this year.

**So I was playing tennis Saturday with my friend Vinnie, and at one point I hit a shot that tipped the net, and just barely bounced over for a winner.
I did the usual tennis thing, raising my racket up to him in the international tennis gesture of apology when such a thing happens.
Then he and I started talking about it. Why do tennis players do this? Why apologize when you get a lucky break? Does a basketball player say “Oops” when his jumper accidentally banks in? Do baseball players apologize to pitchers off broken-bat squibbers that go for singles?
Maybe it’s because we tennis folk are more gentlemanly. But it’s odd that only in tennis do we say “sorry” like that.
Just a rambling observation by me, challenging something in my mind that I never challenged before. That’s what life’s all about.

**Finally today, the brilliant Roger Ebert pointed me to this on his Twitter page. A photographer named Irena Werning loved old photos of people so much, she decided to try to have the subjects re-enact them, 20 or 30 years later, in the same pose. It’s fascinating to view how much we change, and yet stay the same, as we grow older; check out the whole gallery here