End of the line for the Rangers, and other hockey thoughts. A cute kid can’t stop laughing. And James Inhofe, a Grade-A moron 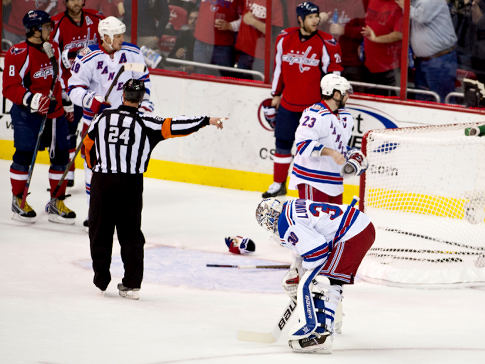 And so for the 16th straight season, the New York Rangers will not win the Stanley Cup.
My beloved Blueshirts were eliminated from the Stanley Cup playoffs Saturday, in five games by the Washington Capitals.
And you know what? They should’ve been beaten in this series. The Caps are at least two, maybe three levels  more talented than the Rangers. And when you can’t score, well, you deserve to lose.
This Rangers team was painfully unable to score in this series, and for much of the season. They’ve got a great goaltender and some terrific young players (kids like Ryan McDonagh and Michael Sauer and Derek Stepan could be special soon), but man, they just don’t have any pure goal scorers besides Marian Gaborik (and he has yet to show up for this playoff series).

But hey, at least they made the playoffs this year, which is more than I can say for last year.  I am excited about the future of this team.
And now I can root for my man-crush Alex Ovechkin and the Caps to go all the way this year (did you see the sweet goal he scored Saturday? Check it out here.)

— This Bruins/Canadiens series has been fantastic. Two straight OT games, including Saturday’s 2-1 Bruins win in double OT. Great hitting, great action, two teams that hate each other… just awesome. Here’s the play of Sat. night’s game, an incredible save by a Bruins forward named Michael Ryder:

— I completely expect Vancouver to choke away Game 6 Sunday in Chicago and come home trying NOT to be the 4th team ever to blow a 3-0 lead in a series.
_ Six of the 8 first-round series have gone to at least six games. Which means we could see multiple Game 7’s this week. Game 7’s are the greatest thing in sports.

**Since we’re all suckers for cute babies laughing, check out this one I saw on the Internet. Man, this girl really loves bubbles!

**Finally, somehow I missed this a few weeks ago, and now having read it I am pretty stunned. Senator James Inhofe of Oklahoma illegally landed his Cessna airplane on a closed Texas runway last year, scaring the hell out of the workers there. The plane actually landed and “sky-hopped” over six vehicles AND over some personnel working on the ground.
What a class act. I wish this incident would get more publicity.

One response to “End of the line for the Rangers, and other hockey thoughts. A cute kid can’t stop laughing. And James Inhofe, a Grade-A moron”