It’s rare, but there are times when I am truly torn on an issue.
Every time I think about it more, I change my mind.
Maybe you’re the same way.
It’s how I’ve been feeling the last couple days about this “should America release the Osama bin Laden death photos?” thing.
On the one hand, I say absolutely, yes. There are factions of people in the world  who will never believe he is dead unless they see a picture. It’s all an American plot, he’s still alive, etc.
I also believe that truth and transparency is almost always the best option. We’ve got the death photo, show it. Let everyone see it. Why not?

And then I consider the other side. And consider the potential damage to Americans and American interest, worldwide, showing the photos can do. The possibility that will inflame tensions in the Middle East, and maybe cause terrorist actions in retaliation for the sure-to-be bloody and humiliating photo.
It’s really a tough call, and one that Barack Obama has made; he’s said he won’t release the picture.

Not sure I agree. But not sure that I don’t.
As usual, Mr. Jon Stewart sums it up pretty nicely in the video above. 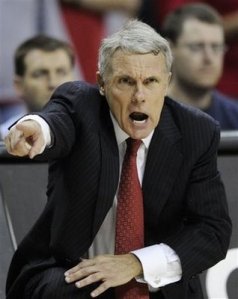 **I shouldn’t have to deal with huge college basketball news on May 5. Nothing ever happens at this time of year.
And yet, Thursday brought two body blows to college hoops junkies like myself. First I learned that legendary Maryland head coach Gary Williams was retiring, at a very bizarre time. Now, as a Duke fan I’ve loved hating Gary for decades; the guy is just so easily hateable. He’s obnoxious, he whines to the refs a lot, and quite frankly his teams have really stunk the last few years.
But the guy is a hell of a coach, and as a reporter I always found him pretty easy to deal with. I’ll miss him, and I’ll miss chanting “Sweat, Gary, Sweat,” at him, and I’ll miss the always-entertaining scene of Gary screaming at the guys on the bench for some grievous offense that the point guard on the floor just committed.
Anyway, while I was digesting the news about Gary, I read this:  Gus Johnson the voice of the NCAA Tournament, is leaving CBS after he couldn’t agree to terms on a new contract.
I’ve written many times about my love for Gus, and his wonderfully energetic calls of college basketball and other sporting events.
Gus makes every game feel bigger, and March Madness will absolutely not be the same without him. I love him as an announcer so damn much.
In tribute, I give you the best of Gus: