An unbelievable win for Dallas. The Spelling Bee is awesome, again. And when a foul ball is more important than your daughter 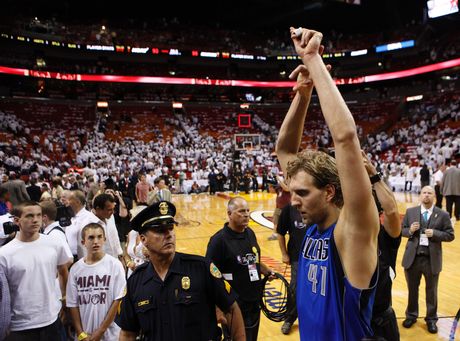 This is why I watch live, competitive sports.
To see the unexpected. To have your jaw drop, your eyes blink rapidly, and your cell phone light up with friends calling and saying “Did you just see that???”

All that happened last night. Because of the Spelling Bee.
OK, no, NOT because of the Spelling Bee. Though the Bee awesome. And I’ll get to that in a second.
No, of course what I’m referring to is the Dallas Mavericks, all set to go down 0-2 to the Miami Heat, and head home to Texas with their collective tail between their legs, staged an epic comeback.
The Mavs were down 88-73 with about seven minutes left. Then went up 93-90 with 30 seconds left.
Yes, they went on an insane 20-2 run, and won the game 95-93.
It was … breathtaking. Beautiful. Watching the obnoxious Heat fans go silent, and seeing LeBron and Wade and Co. slink off the court after they snatched defeat from the jaws of victory was exhilarating.

What a comeback. Now it’s 1-1 and we’ve got a series. This is an all-time crushing loss for the Heat; they might not be able to recover in this series.
This is why we watch. Because the impossible sometimes happens.

**OK, now for the REAL best sporting event Thursday. Man, the National Spelling Bee brought the goods this year. After last year’s disappointing Bee, this year’s was terrific. It lasted much longer than the 2010 Bee, and the quality of the spellers went way up.
At one point when we had five spellers left, they went like five consecutive rounds without missing a word! After a few of my early favorites went out early, I was rooting for Dakota Jones, an awkward-looking excitable kid from Nevada. (And by the way, note to ESPN: God bless you for giving us these little “skits” that try to make the spellers seem cool. But come on, who are we kidding here? These kids are not cool! And that’s what’s cool about them. Did you see last night how awkwardly they high-fived each other?)

After Dakota went out, I thought Joanna would win. But nope,  Sukanya Roy, an Indian girl from Pennsylvania, outlasted Laura Newcombe from Canada. It was tense, it was exciting, and it featured kids who are way smarter than I’ll ever be.

The Bee was awesome. Can’t wait till it’s on again next year.

**And finally, if you’re a parent, and you’re feeling a little bit bad today about your parenting skills, this will cheer you up. No matter how inept you may think you are, you are NOT worse than this dude. Who drops his daughter while in pursuit of a foul ball at a baseball game.