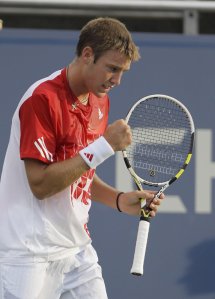 Very few places in the world make me as happy as when I’m at the U.S. Open.
The Grand Canyon. Anywhere surrounded by family and friends. And maybe a few other places.
But it’s a short list. So as I write this, just getting home after 10 wonderful hours at the Open on Wednesday, I’m still kind of floating on a high. I’m a little redder than I was this morning (hey, I used sunscreen, but still, some rays penetrate), and pooped from walking around the grounds, but indelibly happy.
Not going to bore you with too many tennis details since I know not all of you are tennis fans (which puzzles me; it’s the greatest sport there is! But that’s a conversion conversation for another day.)
Instead, some scattered shots from my brain from a day of people (and tennis) watching in Flushing Meadows.
— This kills me. So many people I sat near today had absolutely no interest in the match they were theoretically watching; instead they were playing on their cell phones. Texting, emailing, surfing the Internet, all of it.
People, you are AT a live sporting event! Presumably you paid money to be there. There are 19 courts of live, professional tennis being played in the vicinity! You are mere feet away from some of the best athletes in the world!
And you’d rather text or play Angry Birds or whatever?
I mean seriously, some of these people never once looked at the match. I know because I watched some of them for five minutes at a time, astonished.
— Maybe I’m getting older and wiser or something, but the food prices at the Open, which used to offend me greatly, don’t seem so horribly high anymore.
— Totally underrated feature of the Open: Every time you move from one court to the next, you make a new friend. Meet a couple from Greece Wednesday, two ladies who live like 2 minutes from where I used to in Saratoga Springs, a retired guy from Michigan at his first Open, and two teenagers who kept looking around for a security guard that might throw them out of their primo seats.
— Still cracks me up how many fans wear “tennis gear” to the Open. Boys and girls, you’re not playing, you’re just watching.
— Jack Sock. Remember that name (that’s him, above). I know, his name sounds like a comic book character. But he’s an 18-year-old American playing the Open for only the second time, and he’s got all the goods to be a star. I watched 2 sets of him Wednesday and was highly, highly impressed. Also 2 young U.S. women impressed: Christina McHale and Madison Keys. Not anointing them the “saviors of American tennis” yet, but they were awfully good.

**For another perspective on the Open, here’s Jason Gay of the Wall Street Journal, with a beautiful piece on taking his father, a 38-year tennis coach at a high school in Mass., to the U.S. Open for the first time.

**This clip really depressed me for a few reasons. Bill Nye, the TV celebrity/genius known as Bill Nye Science Guy, went on a Fox News subsidiary (Fox Business Channel) and had to argue with a nincompoop anchor about science, climate change, and if it really exists. Then at the end, Charles Payne (the host) claimed Nye “confused their viewers.”
What a farce. Every single anchor I’ve seen on Fox is a smug, self-righteous fool, and for Nye to go on this show and dignify it with his presence, only to be denigrated, just saddened me.