The insanity of a report card for 10-month-olds. The Giants and Jets win in very different ways. And why the Internet spoils holiday cards

You ever hear something and get enraged for a few seconds, then start laughing so hard your sides hurt and tears are streaming down your face, because it’s so absurd?
Check this out: My girlfriend and I were in Philly this weekend, visiting friends (some of hers, some of mine). Saturday night we’re at her friends’ house, hanging with them and their adorable 11-month old son.
We’re talking about the craziness of parents and teachers putting pressure and grades on kids at a younger and younger age.
And the husband, Dan, tells me:  “You’re going to think I’m making this up, but (their son) got a progress report from day care last week.
“Shut the hell up,” I said.
“No, he really did. And it had stuff on it like “bangs two things together,” with grades like “occasionally, often, or never. “What,” Dan asked, “is a good grade there?!? I mean, my kid got “occasionally,” is that good?”
Progress reports for a kid who has not yet celebrated a birthday. Of course he bangs two things together, he’s 10 months old!

Even better, the baby’s mom told me she was asked on a form recently to list his “hobbies.”

HOBBIES? He’s 10 months old!??? What do you think his hobbies are, bass-fishing and stamp-collecting?!?!.
I’d say his hobbies are pretty much relegated to drooling, sticking food on his face, and pooping in his pants.
Hobbies. Made me laugh so hard I couldn’t breathe. 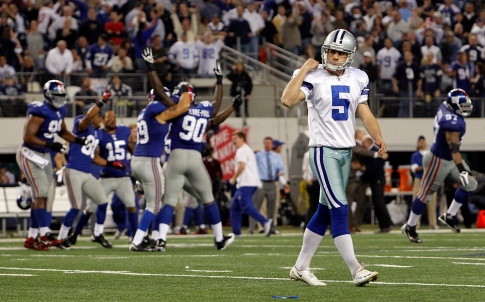 **Missed my first Jets game of the season Sunday (see above note with me being in Philadelphia). But through the magic of DVR and highlights, I see that I missed a pretty thorough beatdown. Looks like Mark Sanchez played great, Shonn Greene ran hard (thanks for waiting until I was eliminated from fantasy football playoff contention to help my team out this year, buddy!), and the defense did what it should do:  Easily crush a bad offense.

And whaddaya know? You look up at the end of the day and the football Gods smiled on my boys. Oakland lost. Tennessee got beat. And Houston and its third-string quarterback, T.J. Yates, rallied in the final three seconds to beat Cincy. So the Jets are now 8-5 and in sole possession of the last wild-card spot in the AFC. Win out, and the Jets make the playoffs. Easy (ha.)

–Meanwhile, what an insane finish to the Giants-Cowboys game. Eli Manning rallies the Giants from 12 points down in the final four minutes, Cowboys get in position to tie and send game into OT, and Dallas kicker Dan Bailey gets his kick blocked and the Giants win, 37-34. Good heavens Eli is having a fantastic year.

— Also, Oakland is now learning what Cincy fans already knew: Carson Palmer is beyond washed up.
— Tim Tebow. Yeah, I got nothin’ to say. The world is just aligning for him this year. I’m giving up trying to question or explain it.

Not saying this is a bad thing. But it’s just one area of life that’s a little less mysterious, and I feel like we’ve lost a lot of the mystery of life through the Internet.