I survive my 1st day of student-teaching. Legitimate progress from stem cell research. And a 7-year-old’s letter to the 49ers’ goat.

I took another big step toward my new career of being a teacher Monday, when I started student-teaching.
For those unfamiliar with it, student-teaching is basically as close as they let you get to being a real “teacher,” without you actually being licensed. From Monday until the end of May, I’ll be spending five days a week, five hours a day working with an experienced teacher in one of New York City’s fine junior high schools.

I’ll be actually “teaching” the classes twice a day, giving me ample opportunity to  screw up, and then fix it. (And tell all of you people my horror stories.)
Couple of quick thoughts from Day 1, when I don’t think I permanently scarred any of the kids for life:
— I love the school I’m at, but how bizarre is this? There are no clocks in any of the classrooms. I asked if that was intentional, so as to not allow the kids to stare at the clock and whine, “Is the period almost over yet?” Nobody seemed to know. It was kinda weird, like studying in a casino or supermarket.
— Gotta admire the way kids love their teacher. In both classes I met today, as students walked in at least two or three ran up to me excitedly asking “Are you our sub today?” They were so disappointed when they realized that no, now they had two teachers at a time.
It’s tough being 12.
— Kids’ memories never fail to surprise me. When I was doing my student observing at a high school last fall, it took most of those kids weeks to bother to learn and remember my name. Yet today on my way to the faculty lunchroom, I heard “Hi there Mr. Lewis!” from a student who passed me.
It was a boy I’d met only an hour ago. Made me feel good that at least one kid was paying attention today.

**I’m a huge believer in stem cell research, as myself and millions of others believe they could prove enormously useful in curing diseases and illness. So it made me smile to hear this story on NPR the other day, about legit progress being made. Two women who have lost their sight may have regained some of their vision thanks to treatment involving stem cells. Check out the fantastic story here. 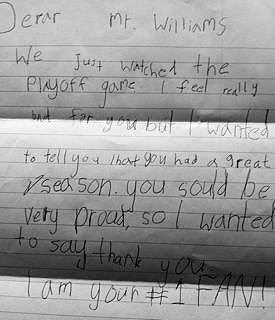 **Finally today, here’s a feel-good story for your Tuesday. A guy named Brandon Sneed has started a cool website called heygoodcall.com, about good news stories involving athletes. I think it’s a great idea. Anyway, found this on his site recently. A 7-year-old boy named Owen Shure is a big 49ers fan, and after watching his team lose to the Giants in the NFC Championship game, he decided to write a letter to the San Francisco player who was the goat of the game, punt returner Kyle Williams.

The letter is above. What a beautiful gesture from a kid who’s being raised right.