R.I.P. Whitney Houston, a supreme talent whose talent wasted away. The glue that looked like Homer Simpson. And when you interview the wrong people, hilarity ensues

When I first heard on Saturday that Whitney Houston had died, my first reaction wasn’t shock. It was a resigned sigh, tinged with sadness but also with a feeling of “well, this was bound to happen sooner or later.”
I thought it was sad that I felt like that. That a 48-year-old woman with a voice like an angel would die suddenly, and I wasn’t really surprised at all.
That’s because for all of Whitney Houston’s extraordinary talent, and wonderful accomplishments (six Grammy awards, 170 million albums sold), she had been, for the last 10 years of her life, a drug addict, an object or ridicule and occasional pity, and a shining example of wasted talent.

Oh, I know she didn’t completely waste her talent; she had immensely popular songs like the beautiful “The Greatest Love of All,” “I Will Always Love You,” and “Saving All My Love For You.”
But in the prime of her life, when she could’ve been doing so much more, she faded away thanks to the scourge of drug addiction and a terrible marriage to the volatile Bobby Brown. For more than a decade Houston’s talent, drive and ambition faded away, and we were left with only memories of what once was. She became a punchline, a reality TV trainwreck playing out before our very eyes.

I have no idea if friends and family tried to help her get clean; you’d be surprised at how lonely celebrities can often be.  But whether she got help or not, nothing worked.

Such an incredible waste. There’s a great line from the movie “A Bronx Tale” that says: “The saddest thing in life is wasted talent.”

Whitney Houston didn’t waste all her talent. In her prime, there was no one better at stirring emotions in you (watch her performance at the 1991 Super Bowl here and try not to get chills). But she could’ve done so much more with her life, and been so much more.

What an absolute shame.
If you missed it, here was the lovely tribute at the Grammys to Houston Sunday night.

**A man in England named Christopher Herbert found a blob of glue that he says looks exactly like Homer Simpson.
So he put it on eBay, and it sold for $239,000 last week. 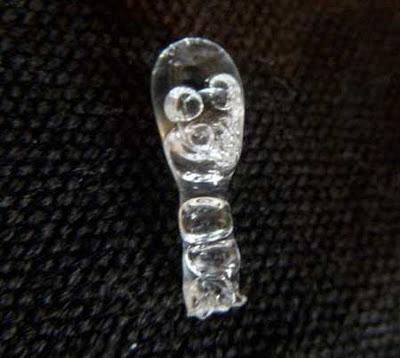 I don’t even have a joke here. I think the story speaks for itself, doesn’t it?

**This cracked me up; a local TV morning anchor thought she was interviewing two people, but it turns out there had been a booking screwup and something, and, well, these people showed up.
Enjoy the awkwardness…