Billy Crystal brought the funny.
Jennifer Lopez brought the wow.
And Meryl Streep brought the love from everyone.
One year after a pretty miserable Oscars hosted by two people who had no idea what they were doing, Billy Crystal and Hollywood kicked some serious butt last night at the Academy Awards.
As always, yours truly was taking notes and gathering comments from the peanut gallery.
— Sunday was the first time I ever attended an Oscars party, and it was super fun. Some friends of my girlfriend host a gala every year at their gorgeous NYC apartment, and it was super fun. There was a pool, some theme food (I particularly liked the Eggstremely Loud and Incredibly Toast) and good mocking all around.

— I thought Billy Crystal was terrific, though oddly he laughed at his own jokes a few times. His opener was hilarious, most of his jokes were spot-on (his political joke was funny, as was most of his banter with the stars in the crowd), and he kept the show moving. He sounded a little under the weather, which was unfortunate. Still, I thought he was great.

–Those Cirque de Soleil people were fantastic. Many at our party went “wow” at the contortions they were doing. Gotta see that show live one of these days.
— Jennifer Lopez. Wow. It seems like only at awards shows do I remember how beautiful she is. Thought Clooney’s girlfriend Stacy Kiebler, and Tina Fey looked particularly fetching, too. As did Viola Davis.
— So happy Meryl Streep won her third Oscar (her speech is at this link), and first in 29 years. Yeah, maybe Viola Davis deserved it, too, but Meryl has been so good for so long that I’m glad she got another moment in the sun. She’s the finest actor, male or female, in America. And a genuinely nice person from Jersey, too.
— Line of the night from one of the guys in our party: “Nick Nolte could walk right from the red carpet into the Death Montage.” Man, Nick looked bad.

— Very sweet speech by the guy who won for “A Separation,” from Iran. Thought it was interesting that as he was speaking, the cameras flashed right to Steven Spielberg, one of the most famous Jews in Hollywood.
— I thought Emma Stone was trying way too hard. But the “Bridesmaids” ladies were very funny.
— Chris Rock killed in his two minutes on stage. I wish they’d let him host again.

— Finally, though Streep’s win was one of the only “upsets” of the night, I actually liked the pacing of the show this year. Some of the interludes were interesting and I’m glad they didn’t subject us to 9 Best Picture vignettes. Good stuff all around. 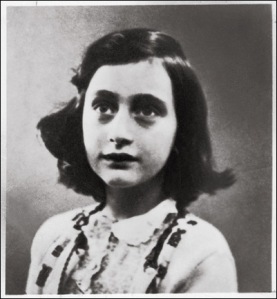 **I don’t quite know what to say about this story, except to just present it and let you try to figure it out. For at least the 10th time, the Mormon Church has decided to posthumously baptize Anne Frank into the church. Yes, that Anne Frank, the famous Holocaust child who hid in the attic, then died in a concentration camp, has been baptized into the Mormon church.

Offensive and bizarre on so many levels. To try to use Anne Frank as a prop to proselytize about your religion is just ridiculous and wrong.
Would love to hear Mitt Romney weigh in on this one.