Penny Hardaway gives back. Kirk Cameron smacked down by other 80s child stars. And kids save a school bus from disaster 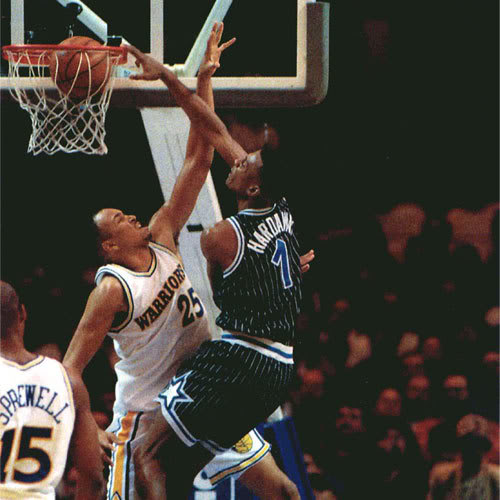 And a happy Friday to all of you; I’m extremely happy this morning since my New York Rangers took step one toward the Stanley Cup, beating Ottawa 4-2 at Madison Square Garden Thursday night…

We begin today with a former NBA star you probably haven’t thought about in at least 10 years.

Anfernee “Penny” Hardaway was once one of the Top 5 players in the NBA, starring in hilarious commercials with Chris Rock before injuries and age took their toll on him. Hardaway had a bad reputation when he left the NBA, for selfishness and helping get a coach fired while with the Orlando Magic. But he’s most definitely turning around any negative attitudes about him now.

Hardaway is coaching in his old hometown of Memphis, but this is no glamour position: He’s leading the 7th and 8th graders at inner-city Lester Middle School, the same school Hardaway first starred at.
He’s coaching at this level because a good friend of his and the former coach at Lester, Desmond Merriweather, is suffering from cancer. When Hardaway found out his old pal needed a hand, he jumped right in.
And now, he’s helping change lives. Growing up without a father himself, he’s become a role model and a hands-on mentor to kids who desperately need a “success story” to give them hope.

He met with gang leaders, asking them not to recruit his players for their gangs. (They complied). He hosted players at his enormous mansion, showing them what’s possible. And he worked each player hard in the classroom, and the team GPA slowly rose under his leadership.

So many NBA millionaires never look back when they leave. Penny Hardaway is back doing good in Memphis, and it’s a wonderful thing.

**This, I thought, was brilliant (but NSFW, use headphones if you’re at work). Kirk Cameron, former star of “Growing Pains” (“As long as we’ve got each other,” come on, you know the words…) has become well-known as a gay bashing, far-right wing infomercial superstar. Well, his former colleagues as TV child stars of the 1980s and 1990s are standing up to try to take him down a peg (Loved seeing one of the twins from “Hogan Family!”)
Enjoy this from Funny or Die…

**Finally we have the story of a couple of brave, quick-thinking kids in Milton, Wash.  While riding the bus to school Monday, the students noticed the driver had a medical emergency and slumped over in his seat.
So Jeremy Wuitschick ran to the front of the bus, grabbed the wheel, and started trying to steer. He pulled the keys out of the ignition, but the bus kept running.
Another boy, Johnny Wood, helped out by trying CPR on the driver, and attempting to bring the bus to a stop.
Nobody was hurt, the driver is recovering, and a couple of 7th graders are going to be awfully popular around school for a while.