The married couple whose clothing has matched for 35 straight years. A very cool day with the Stanley Cup. And a 6-year-old makes the Spelling Bee finals 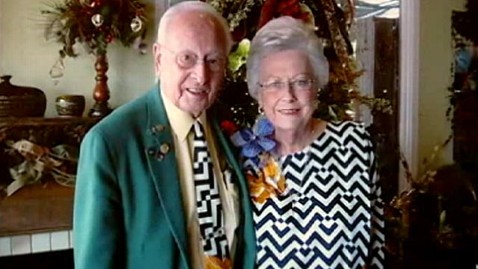 I really don’t even know what to say about this story, except that it’s just wrong, what this couple does.
Meet Mel and Joey Schwanke, who have been married for 64 years. That’s awesome, and God bless them for being married that long.
But the Omaha, Neb. couple have a bit of a different marriage: For every day of the past 35 years, the fabric of Joey’s tie has exactly matched the color of Mel’s dress.
Every. Single. Day.
They have, according to this story, 146 different outfit combinations they can choose from.
I mean, what can you say? I’ve heard of older couples who start dressing alike after being together for a while, but this is a little ridiculous.
If you click the link above, there’s a video of Mel and Joey, too. Highly recommend it.

**The Stanley Cup Finals begin tonight, and even though I’m sad the Rangers aren’t in it, it still should be a pretty compelling Finals. But the star, as it always is in the hockey playoffs, is the Stanley Cup itself. It’s the greatest trophy in sports, one I’m proud to say I’ve touched once (one of the best days of my life, truthfully).

Chris Jones, the wildly talented Esquire and ESPN writer, had a great story idea, executed well. He asked the NHL if he could borrow the Stanley Cup for a day, and just take it around his small Canada hometown and see people’s reactions to it.

What happens to Jones (and to people who touch it) is truly a great read.

I got a horrified laugh followed by a look of utter puzzlement from her, but hopefully no reaction that will make her give back the ring.

Anyway, the Bee is must-see TV for me every year, because A, I love seeing smart kids get rewarded by being famous for a few hours, and 2, because spelling is so horrendous among America’s children these days (believe me, I just finished grading 7th graders’ work for four months, we have a spelling epidemic in this country) and I like being reminded that some people can still spell.

Anyway, so the Bee is this week and I’m excited. Especially after I read this story, about a 6-year-old girl named Lori Anne Madison who is the youngest National Spelling Bee contestant in history. Lori sounds awesome, I hope she goes far!