A glorious night in America, as an African-American gets re-elected President. 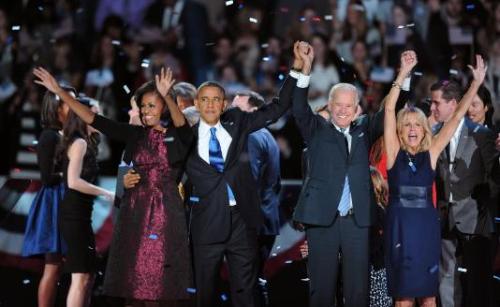 Warning: This blog post may be only semi-coherent, as I’m beginning to write it at 3:04 a.m….

Four more years of the equal rights of women and gays to do with their own bodies, and love whoever they want to, being respected.

Four years where maybe, real progress is made on climate change and the drug war and economic policies that help the neediest.

Barack Obama got it done Tuesday, and in a huge way. 332 Electoral votes (I’m counting Fla.) in this day and age is massive, and absolutely gives him a strong push for a second term that’s historic and revolutionary.

His acceptance speech was beautiful and touching and rousing, the kind of speech Obama gave in 2008. It made me proud to have voted for him.

I’m exhausted but happy and thrilled to be an American tonight.

Some other huge headlines on a election night when liberals like me couldn’t have asked for much more:
— The Senate races fell about as great as possible for the Dems. Chris Murphy won in Connecticut (hey Linda McMahon, what did that $77 million get you?). Elizabeth Warren and Heidi Heitkamp won, too.

— Tammy Baldwin, the newest Senator from Wisconsin, deserves her own paragraph. She’s the first openly gay Senator in U.S. history, and what a wonderful pioneer she will be. A great night for women politicians all around.

— A terrific night to see two silly barriers start to come down. First, Maine and Maryland legalized same-sex marriage, the first state voters to approve this enormous change. Washington state may do the same, although full results for that won’t be in for a few days. And a constitutional amendment declaring that marriage is only between a man and a woman was defeated, too. Gay marriage for all in America is now irreversible, don’t you think?

And Colorado and Washington state citizens legalized marijuana, a long-overdue move. I know the federal gov’t won’t allow people in Denver and Seattle to just start smoking up in public, but finally, the people have spoken and acknowledged how silly it is for pot to be criminalized.

— Thank you, Florida Democrats, for refusing to let Rick Scott and his disgusting voter-suppression tactics give Romney a win there.
— Fox News was fascinating after the race was called, with Karl Rove bitching that Fox News’ own analysts shouldn’t have called Ohio for Obama so fast. Bizarre stuff.

— Oh, and just when I thought the night couldn’t get any better, with Dems making gains in the Senate and Obama cruising to re-election, at least 1 and maybe 2 of the most radical, dangerous GOP House members go down to defeat. Allen West of Florida lost by about 2,000 votes to Patrick Murphy, and Michele Bachmann as of this writing is clinging to a 900-vote lead in Minnesota, with 11 percent of the vote still to be counted.

I know, I know, it’s too much to ask for. But if Bachmann could somehow lose, I’d be so, so happy.

— “Hillary 2016” was trending on Twitter tonight. Heaven help us, Dems, do we really want to go back to that? Won’t it be time for some fresh blood? Ah, not gonna let the specter of another Hillary run get me down tonight. I’m in too good a mood.

— The best line in any speech Tuesday night came from Colorado Gov. John Hickenlooper, who will be a serious 2016 Prez candidate if he wants to be. This is what he said about the pot legalization victory:

“Federal law still says marijuana is an illegal drug so don’t break out the Cheetos or goldfish just yet.”

— I have no idea where Mitt Romney goes from here. I thought his concession speech was OK. This election was there to be won by a better candidate who actually help positions and consistent beliefs.

— Finally, let’s never take for granted that we get to have peaceful elections in this country. It’s a wonderful thing.