A Hawaiian vacation to remember: Tales from two weeks in paradise

Hello loyal readers, your humble blogger has returned tanned, rested, and filled with guava juice and mahi mahi, two of the wonderful delights I enjoyed while on my two-week honeymoon spread over three Hawaiian Islands.

And let me tell you, it was real hard getting back on that plane to come home. Does anyone ever really want to leave Hawaii?

So much to blog about concerning the best trip of my life, and the birthplace of our current President (who I’m pretty angry with right now, but that’s for another day’s blog).

The food, the setting, the hotels, the excursions we signed up for… everything was just fantastic. I’ve heard my whole life from people who’ve been there how awesome Hawaii was, and still … they didn’t do it justice.

Because you don’t have time to read a 2,000 word blog post today (hey, it’s Monday, even I’m getting back to work) I’m breaking up my thoughts from the honeymoon trip into two parts; Part 2 will be tomorrow and will have other non-Hawaii stuff in it, too.

OK, here goes my ramblings on the best trip ever…

— First of all, the sunsets. Just beyond gorgeous (my bride took the one above), and that’s coming from a sunset freak with high standards. A few nights were too cloudy and other times we were busy doing other activities during the sunset, but the ones we saw were spectacular.

— Second, the hotels were magnificent. Our first two stops were in Maui and then on the Big Island, near Kona, and the hotels there were terrific. Great service, wonderful pools and beaches, absolutely no complaints.
But then we went to our “splurge” hotel on Kauai, the St. Regis in Princeville, and they made the other two hotels look like La Quinta’s on the side of the highway.
This is the view from the 9th floor lobby, and it get better from there. The finest hotel I’ve ever stayed in, and frankly I never wanted to leave even to go do fun stuff. If you ever go to Kauai, it’s worth it to stay there.

— One of the many, many differences between Hawaii and every other state I’ve visited: You never see one out-of-state license plate. I looked and looked but came up with nothing. Kind of a hard state to drive to, apparently. 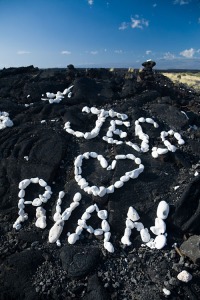 — One of the strangest things I’ve ever seen on the side of a road: On the Big Island of Hawaii, teenagers and others write graffiti in rocks on the side of the road, where there’s literally nothing else. I thought it was pretty cool.

— Shelley and I of course met a ton of other honeymooners on our trip, but surprisingly very few New Yorkers. We laughed quite a bit at others’ reactions to meeting us, including a few people from St. Louis who said after a few minutes of chatting, “You know, I’ve always heard NY’ers are mean, but you guys are really nice!”

— Probably my favorite trip we took was in Maui, when we went on a snorkel cruise that took us to the seriously isolated island of Lanai.

You may have heard that Larry Ellison, the Oracle billionaire, just bought the island for like $700 million. There are very few people and even fewer things to do on Lanai, so you can imagine our tour guide’s excitement when she raved about Larry putting in a new bowling alley, swimming pool and movie theatre. Man, was she excited.

— I think the general attitude of Hawaiians was summed up by an Avis rental car agent I overheard in Kona, telling a customer she’d be OK leaving her bags outside for a few moments while checking in at the counter.
“Lady,” he said, “you’re in Kona, not Los Angeles. The bags will be fine.”

— Some of my new favorite things after the last two weeks: Guava juice (who knew?), Hawaiian shirts, pineapple ginger ale, and the word “mahalo” for “thank you.”
— The “traffic” reports on Hawaii radio stations killed me. They said things like “there’s a slowdown on Kihuo Highway, a few stalled cars on (fill in other name), and that’s about it.” In New York, traffic reports go on for five minutes.

— Finally today, while walking through the town of Pa’ua on Maui, I saw a street musician playing Pat Benetar’s “Heartbreaker” on a ukulele. An inspired choice, I thought, so I gave her a buck. Hey, 80s music is 80s music.

More thoughts coming tomorrow, including how I ziplined across an 1,800 foot wire at 65 miles per hour and lived to tell about it.

4 responses to “A Hawaiian vacation to remember: Tales from two weeks in paradise”