The great Federer, an even better person than player. The 9-year-old drumming prodigy. And strangers chip in for a dying woman’s wedding 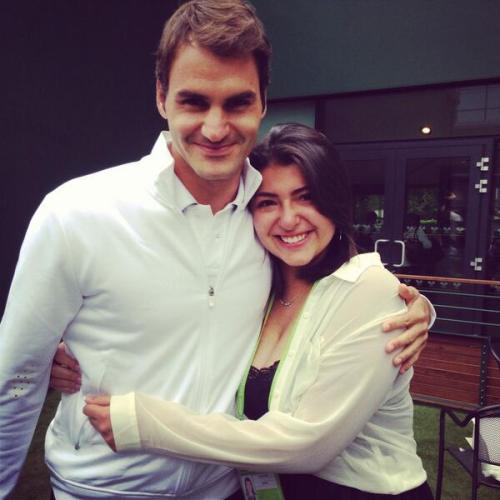 My family and friends sometimes get tired of hearing me gush about Roger Federer.
He’s my all-time favorite athlete, but not just because of the incredible talent that’s made him the best tennis player of all-time.

It’s his humanity. So many top athletes that I’ve seen up-close are phonies; they pretend to care about fans and “regular people” when the cameras and microphones are around, but in reality they don’t care at all.

Federer is the opposite of that. His many good deeds off the court over the years have been well-chronicled, but it’s stuff like this amazing story that also shine through.

Here’s the basic deal: A 17-year-old Maryland girl named Beatriz Tinoco had cancer two years ago, and she told the Make-A-Wish Foundation that her ultimate dream would be to meet Roger Federer.

A year passed, and Beatriz hadn’t heard anything. Then, this past June, her dreams came true. Times 1,000.
Please read her account of what Federer did for her, going SO far above and beyond what other athletes would do. It began with him flying her to Wimbledon, hitting around with her on a practice court, and just kept getting better and better after that.

When I was a boy, I stupidly admired John McEnroe, an anti-sportsman who treated people terribly.

If I am ever lucky enough to have a son, I will tell him about Federer, an absolutely glorious role model.

**Now, speaking of really talented people, let me introduce you to Briggs Akers, a fantastic drummer. Who’s still in single digits in the age category.

Dude is 9, and listen to how good he is! Here’s a fun story about how he got so good.

**To wrap up Good News Friday, a terrific story pointed out to me by my awesome mother-in-law. A 35-year-old California woman named Jen Bulik  was diagnosed with stage 4 lung cancer in December, and doctors told her in June she had six months to live. (Wait, I promise, there’s good news in here!)
Jen’s boyfriend Jeff proposed to her last month, and when a Bay Area wedding planner heard about it, she jumped into action. Erica Ota helped arrange donations and gifts for the couple, and they didn’t have to pay anything for their wedding last Saturday, and strangers have also helped pay for her medical expenses.

Even in the darkest situations, a little joy can be found.