The guy who knit a sweater while running a marathon. Jason Kertson amazes me. And Is the NSA going to make us more enemies than Dick Cheney did? 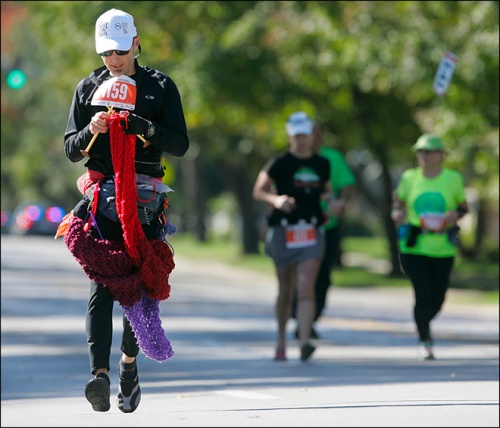 I love stories that leave me shaking my head in awe and complete puzzlement, all at the same time.

Like this one. A man named David Babcock recently ran into the Guinness Book of Records, when he finished the Kansas City Marathon in 5:48.27.
While knitting a 12-foot scarf.
Yes, Babcock is a college graphic design professor by day, and a speed knitter in his spare time!

So here are some of my many questions: Is he a knitter who likes to run, or a runner who just happens to find knitting fun? How does he prevent pricking himself with the needle while running around rough terrain? When he finishes a race before finishing his scarves or sweaters, does he keep running so he can finish? Does the person who gets the scarf from Babcock complain that it’s all sweaty?

I could go on. But you get the idea. Knitting and running, who ever thought of it? Reminds me of the old Seinfeld joke about the biathlon. “Let’s combine cross-country skiing, with shooting a gun. That makes sense.”

**Next up today, I have no idea where this came across my radar this week; honestly, I’ve looked in all the usual places I go to but came up empty (maybe I dreamed it or something).

Anyway, it’s not new but still incredibly awesome: A kid named Jason Kertson has perfected the art of playing two guitars at once. It was actually hypnotic for me to watch this guy so zoned in and playing them so perfectly.

**Finally, I’m really, really getting sick of the NSA, and how we are basically spying on every country, all the time, and every day I wake up to headlines like this one, from NPR: “U.S. did not spy on French, Spanish citizens.”

We had the NSA chief, Keith Alexander, declaring the most recent documents revealed by leaker Edward Snowden were false, that nosireeebob, we did not spy on any French or Spanish citizens.

Just like we didn’t spy on Angela Merkel, and we don’t go through Americans’ telephone calls, and we don’t… you get the picture.

I never thought I’d say this in my lifetime, but with all of this international spying crap going on, the U.S. might be heading to levels of world unpopularity not seen since the reign of W. and Cheney.

Look, I know it’s a dangerous world out there, and we have to do all we can to fight terrorism, yada yada yada. But every day, every week, come more revelations of American intelligence doing things in secret that they really ought to be ashamed of doing.

Can’t wait to see what next week’s headlines will bring: “U.S. put hidden camera on Italian prostitute to spy on Silvio Burlesconi.”

2 responses to “The guy who knit a sweater while running a marathon. Jason Kertson amazes me. And Is the NSA going to make us more enemies than Dick Cheney did?”