U.S. soccer battles valiantly, but falls to Belgium. A fantastic commercial empowering young girls. And a stunning Wimbledon upset, as Nadal goes down.

For just a few minutes, I started dreaming.
After Belgium had thoroughly dominated the U.S. Tuesday evening and finally, after superhuman goalkeeping by Tim Howard broken through for a couple of goals, leading 2-0 with just 15 minutes to play, it looked like it was over for America at the World Cup.

But then, a 19-year-old kid named Julian Green scored a great goal, and the U.S. was pressing, and Clint Dempsey had an incredible chance right in front of the net of a perfect set piece, and maybe, just maybe, we were going to tie Belgium and win on penalty kicks.

But nope. Belgium hung on, and they 100 percent deserved to win. They were so much better than the U.S., offensively, defensively, everywhere but in goal.
Tim Howard, the U.S. netminder, may have had the best game in goal of any American keeper, ever. He was incredible back there, a stone wall of defense.

(My favorite “Tim Howard was awesome” Tweet Tuesdsay night, and there were many fantastic ones, came from Grey Munford: “Tim Howard’s protection is so effective, Hobby Lobby has banned him from their stores.” I also heard Tommy Smyth on the ESPN Radio broadcast compare Howard to Henrik Lundqvist. Beautiful.)

And so for many American sports fans, the World Cup is over. But for millions more, like me, it goes on, because we’re hooked on this tournament now.

Couple great pieces I wanted to share about Tuesday night: Sports On Earth’s Will Leitch wrote a terrific story about why there’s reason to hope for the future of U.S. Soccer, and ESPN.com’s Chris Jones with a beautiful column about each American player in the starting lineup, and what playing for country meant to them.

**After yesterday’s awful news about the Supreme Court’s disregard for women’s health and well-being, here’s a nice palate-cleanser. A group called the Always Global Puberty Education Program has been doing excellent work all over the world for decades, and they just put out this terrific PSA on what it means to younger people about what doing something “like a girl” means to them.

Really, really encouraging stuff. In five days, this video has been viewed more than 14 million times. 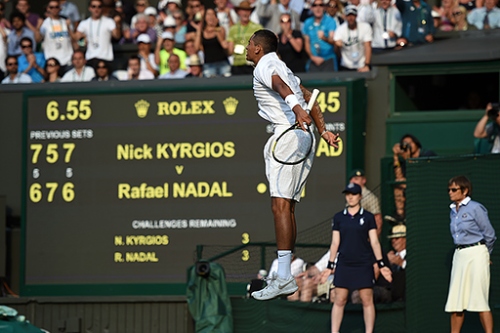 **Thrilling day at Wimbledon Tuesday, with Rafael Nadal getting upset by a much-lower ranked player for the third straight year.

Truly though, this time Rafa didn’t play poorly at all; 19-year-old Australian Nick Kyrgios just took it to him, playing beautiful, brilliant tennis. Kyrgios showed no fear, and when the match got tight in third and fourth sets, the kid showed zero nerves.

What does this mean? Well, it could be the arrival of a new star, as Kyrgios has the serve, forehand and cojones to be a top player, it looks like (and you’ve gotta love his enthusiasm.)

And also, Rafa’s ouster is great news for Roger Federer, who, if he beats Stan Wawrinka today, won’t have to see his nemesis in the semis. Not saying my man Fed is going to win Wimbledon, but his road looks a lot easier than it did yesterday morning.