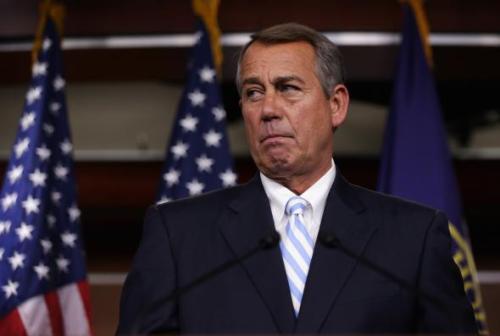 So you know how sometimes when two groups or teams you really dislike start fighting with each other, it’s fun to just sit back, have some popcorn, and enjoy the spectacle as they try to destroy each other?

Like for me, when the Flyers play the Penguins in the Stanley Cup playoffs. Or the Patriots and Dolphins go at it in the NFL. Or when a Kardashian is in a fight with another Kardashian.

You get the point. Last Friday, while most of us were making weekend plans or thanking the heavens winter is almost over, two of my least-favorite groups of politicians were once again having a little deathmatch, and it was a tiny bit fun to watch.
Yep, the Tea Party Republicans and the “regular old conservative” Repubs had yet another tussle, and once again it blew up in everyone’s faces.

If you missed it, a quick 100-word recap: The GOP hates Obama’s immigration executive action from last fall, and threatened to stop funding the Dept. of Homeland Security at the end of February if the re-funding didn’t include blocking implementation of Obama’s executive action.

So with a deadline looming on Friday, House Speaker John Boehner (who, frighteningly, is now considered a “moderate” in the House) cobbled together a plan that would fund DHS for three more weeks, at which point, I don’t know, we’d go through all this again.

But for at least the third time in the last couple of years, a plan the GOP put together themselves was voted down by the GOP as a whole, a one-week extension was agreed on, and now this Friday we’ll be back in the same spot.

I mean, in one sense, this is hilarious. Liberals like me enjoy the self-destruction of a party from within, and seeing nutjob lunatics from the GOP right-wing fringe attack those in power is a true window into crazy.

But you know what? It’s also kind of scary. Because just like last time they had the majority in both houses, the GOP can’t get anything done. Forget about convincing Democrats to go along with anything; they can’t agree on anything themselves. Which means we’ve got at least 2 more years of zero legislation coming out of Congress.
I forgot where I read this this weekend or I’d link it, but it IS nice seeing the other party eat its young, instead of the Dems doing it.

Ah, the GOP House. More entertaining than anything on TV.

**Next up, this went viral last week and totally deserved it: Meet the Louisville Leopard Percussionists, a group of 7-12 year old musicians who did an awesome set of Led Zeppelin songs, on the xylophone? Jimmy Page himself shared this on Facebook; how cool are these kids?

**And finally, one thing longtime readers know about me is that I love to highlight hilariously bad or strange Internet “predictions” from the 1980s or early ’90s.

Well, this story, pointed to me by my smart friend Christine G., might take the cake for wrongness, and hilarity. Clifford Stoll, writing for Newsweek, penned a story in 1995 with the headline “Why Web won’t be nirvana,”  and among his declarations:

— “The truth in no online database will replace your daily newspaper, no CD-ROM can take the place of a competent teacher and no computer network will change the way government works.”

— “How about electronic publishing? Try reading a book on disc. At best, it’s an unpleasant chore: the myopic glow of a clunky computer replaces the friendly pages of a book. And you can’t tote that laptop to the beach. Yet Nicholas Negroponte, director of the MIT Media Lab, predicts that we’ll soon buy books and newspapers straight over the Internet. Uh, sure.”

And my personal favorite…

–“Then there’s cyberbusiness. We’re promised instant catalog shopping—just point and click for great deals. We’ll order airline tickets over the network, make restaurant reservations and negotiate sales contracts. Stores will become obsolete. So how come my local mall does more business in an afternoon than the entire Internet handles in a month? Even if there were a trustworthy way to send money over the Internet—which there isn’t—the network is missing a most essential ingredient of capitalism: salespeople.”

Poor Mr. Stoll. It’s one thing to get a prediction wrong, but this is SO hilariously wrong I feel he deserves to be mocked.

Now if you don’t mind, I’m going to my local mall to buy something for twice the price of what it is online, because I just really miss salespeople!