The trailer for the new “Rocky” movie thrills me, against my will. A beautiful story of Arthur Ashe helping a young boy. And if toddlers texted, what they would say?

I realize I may be in the distinct minority here, but I loved “Rocky II” more than the original.

I love all the Rocky movies, of course, because I’m a red-blooded American male and there’s nothing more American than Rocky, dammit. (I didn’t love “Rocky V” because “Rocky V” didn’t exist, you understand? Did. Not. Exist. Sorry, I get a little aggressive talking about Rocky Balboa.)

The second one is my favorite, not just because it had the better ending (SPOILER ALERT: Adrian goes into a coma, an awesome training montage, and then a double-knockdown in the 15th round? Can’t beat that.) but because I think it was a better overall movie.

But hey, I loved all the Rocky movies, have watched the first four at least 20 times each, used to lift weights in my basement in high school while blasting the “Rocky” soundtrack (it’s beyond fabulous), and my father and I still often quote “Rocky” lines to each other and crack each other up.

Why am I telling you all this, on July 8, 2015? Because I just found out they’re making another movie based on the story of Rocky Balboa. It’s called “Creed,” and of course it’s about Apollo Creed’s son growing up to be a fighter, and he’s played by the terrific actor Michael B. Jordan (from “Friday Night Lights,” and “Fruitvale Station” fame), and my first 11 instincts are that this is going to be a train-wreck.

I mean come on, does the world NEED another Rocky movie? This would be, what, the seventh installment in this series? How much more do you want to run it into the ground? Can’t we all just leave well enough alone already, or must Rocky end up like “Friday the 13th” and no one even remembers the individual movies anymore, just the franchise?

So I was prepared to hate “Creed.” Then the trailer got released last week.

And now I can’t wait to see it.  Seriously, watch that and tell me you don’t want to see it. Thanksgiving weekend, yeah, I’ll be at the movie theater.

Dammit, they’ve sucked me back in. 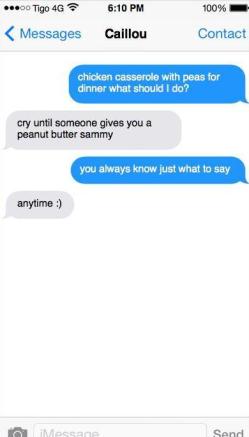 **Next up, my smart and talented friend Jen M., a mom of 3, alerted me to the brilliant Honest Toddler Twitter feed, which spits out really funny and clever stuff about what life would be like if we could read the minds of our little ones, and vice versa.

This post here is about the Top 10 Toddler texts that could be real, if they could text.

The photo above is one of my favorites, but they’re all fabulous; the best one is No. 4, about Elf on a Shelf.

**Finally today, it’s Wimbledon time, which always gets me thinking about one of my all-time heroes in life, Arthur Ashe. He’s been talked about a lot at this year’s tournament because it’s the 40th anniversary of his historic, groundbreaking championship win at the All England Club in 1975, when he beat Jimmy Connors in the final.

As often happens with anniversaries, there’s been a lot of fond remembrances of Ashe this week, and that’s a wonderful thing, because he died far too young and I fear younger sports fans don’t know and appreciate just how influential and pioneering Ashe was, for athletes and for the human race in general.

He touched so many lives, and did so much good, in such a short time. Kurt Streeter, a very talented writer, penned this piece for ESPN.com about his brief time knowing Ashe, and how he helped a young black kid in need.

It’s a wonderful story about a man loved by so many.