The pizza place that gives free slices to homeless people. A high school tennis player wins a title, 11 weeks after being shot. And praise almighty, LaGuardia will be improved!

And a happy, steamy Friday to you all out there in Internet-land. Three great stories for Good News Friday this week.

First, there’s a pizzeria in Philadelphia that deserves your love, and has been getting it. Rosa’s Pizza owner Mason Wortman sees homeless people on the streets around his shop all the time, and last year he decided he wanted to do something about it.

So he put up a sign asking customers to donate $1 when they order, and to use that money to buy slices of pizza for the hungry of their city.

According to this story on Upworthy.com, as of June 2015, Rosa’s has given away more than 23,000 slices of pizza, and is providing meals free of charge to up to 100 people on any given day.
What’s more, Rosa’s is hiring more employees thanks to his booming business, and he’s been great enough to hire through agencies that connect homeless people with jobs.

What a fantastic idea. I hope more pizzerias do this, because homelessness is a problem that’s not going away anytime soon. 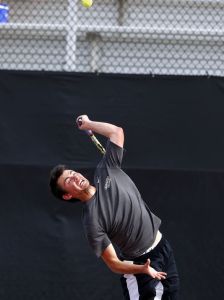 **Next up, one of those sports stories that seems incredible, but is true. Mason Dragos was a star tennis player at Lexington High School in Indiana this past school year, and looked to be on his way to compete for a state singles title.

On March 14, near the start of the season, Dragos and his friends went to a local pizza joint on a Saturday night. While they were eating, a handgun sitting on the counter just a few feet from them went off.

Dragos was wounded when the bullet ricocheted off the pizza shop counter and hit him in the chest.

There was blood everywhere, of course, from his hands, where the bullet had sprayed pieces of granite countertop everywhere, to his arms and legs.

At the hospital later, Dragos’ father said doctors told him the bullet that hit his son was one inch away from his heart.

Mason Dragos made an incredible recovery; 11 weeks after the bullet hit him in the chest, he won a state tennis championship.

There’s gotta be a movie in that story, am I right?

**Of all the Good News Friday stories I’ve run over the past two years since I started this weekly feature, this one might bring me the most joy to report.

My feelings of hatred and contempt for LaGuardia Airport cannot be adequately put into words. My loathing for Walmart, Time Warner Cable, McDonald’s… those I have railed about for decades, and can rattle off reasons for my rage at them.

But LaGuardia, it’s just so awful, in so many ways. Dangerous for pilots, awful and congested for passengers, horrendously spread out and impossible to drive into, plus, I’ve literally never flown into and out of that dump with an on-time departure or arrival.

So it brought me immense joy this week to read that finally, finally!, the airport is getting a makeover. Thanks in part to my main man, Vice-President Joe Biden, who last year called LGA “a third-world country” (and frankly I think he was insulting third-world countries there), LaGuardia is getting a $4 billion makeover (see above for what it’ll look like).

New terminals! New ways to get there, like subway and rail stops so we don’t have to fight the traffic! And most importantly, longer runways and taxiways, so passengers’ lives aren’t in mortal danger everytime two planes try to land at the same time.

Seriously, this is so freaking exciting for NY’ers like myself. 2021 can’t get here soon enough.