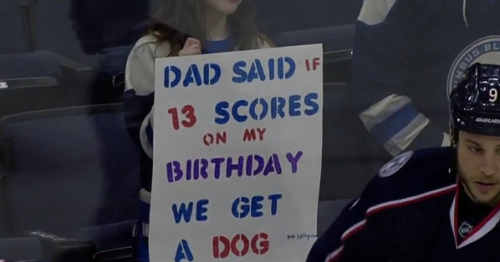 And a Happy Friday to you out there on the InterWebs. Me and the family are headed to South Jersey for the weekend with friends, which means we are legally required to listen to Bruce Springsteen for the ride down (we probably would anyway even if it wasn’t the law).

Hope you have a great weekend, let’s start today’s GNF with two things we all agree are awesome: Hockey players and puppies.

Last week in Ottawa, a Senators fan help up a sign for star Bobby Ryan that read “Bobby Dad said if you score we get a puppy.” And of course, Ryan scored later in the game.

Then a day later in Columbus, the above sign was held up, and boy, is that Dad going to be mad at Cam Atkinson (No. 13). Dude scored not once, not twice, but THREE times that night! I don’t know if this means that the family is getting three puppies, or three families will each get a puppy, or what.

But now #puppygoal is a Thing on Twitter and this will probably catch on and that’s awesome and the only down side I see are the tears of some 9-year-old girl when Ovechkin or Kane doesn’t score on the night they’re supposed to and she then has to live a canine-free life.

But hey, puppies in Ottawa and Columbus, two of you are about to get new homes!

**Next up, I love my wife. I like to make her happy and usually honor her requests. So when she sent me this video and told me it had to be in this week’s Good News Friday, I said “sure!” Because, again, I love my wife.

Then I watched it, and it’s pretty funny. Ben Folds Five, the cast of “Fraggle Rock,” and the gorgeous and talented Anna Kendrick (I may have mentioned this before, but she’s on my Top-3 list of “celebrities I’m allowed to sleep with” should the opportunity ever arise. And yes, Ross Gellar, my list is laminated.) 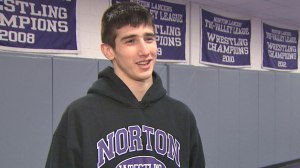 **Finally today, this is beautiful and heartwarming. A high school wrestler named Deven Schuko of Norton High in Mass. was undefeated this season, going 27-0. Until last week, when he allowed himself to be pinned by Andrew Howland of Dighton-Rehoboth Regional High. Howland suffers from Downs Syndrome, and has been an honorary member of the Dighton-Rehoboth team. He’d wanted the chance to wrestle, and when Schuko’s coach asked if anyone would be willing to take Howland on, Schuko volunteered.

Watch the video of the match here.

“If I had to lose to someone, I’d like to lose to Andy,” Schuko told WCVB-TV. “It was a win-win in my book. He won, I won.”
Good on ya, Deven Schuko. Compassion and heart are much-needed in the sports world, always.