Super Tuesday brings more Trump victories, and it’s almost over for Bernie. And The latest “Mean Tweets” is great.

Well that kind of sucked.

Super Tuesday came and went in the Presidential race, and some of the things I was hoping for (somebody slowing down the Trump-mentum, Bernie Sanders outperforming expectations) didn’t quite happen.

Instead, the man the great Charlie Pierce calls “the vulgar, talking yam” dominated yet again. As I write this late Tuesday night the orange-faced idiot has won six states, and could win a couple more.

He is amazingly, truly an unstoppable force right now. Marco Rubio ain’t stopping him (Headline of the night: “Rub-i-No”), Ted Cruz ain’t stopping him, and all this bluster and bravado about millions of dollars suddenly coming in from the GOP Establishment, and the horror they’re all suddenly feeling and their insistence that they’ll be the ones to destroy Trump… yeah, I’m not seeing it.

It’s March 2 and a racist, sexist, xenophobic ego-whore is going to be a major party candidate for President. God save us all.

Even though Tuesday night didn’t go as well as I’d hoped, I sure had lots of fun watching, Tweeting, and reading all the coverage. Lots of thoughts on the results…

— First and most importantly in my mind, on the Democratic side, Hillary continued to do what she needed to do. She dominated the South, she dominated among African-American voters, and except for Massachusetts, none of the states she won were particularly close.

My  man Bernie won Vermont, Oklahoma, Minnesota, and Colorado, but lost Mass., which I think he really needed to win. It’s not over Bernie, the fat lady isn’t singing yet, but she’s sure warming up her vocal chords.

— Hillary continues to astound me with her firebrand liberal speeches on primary  nights. I don’t care if she comes out holding copies of “The Nation” and reading from Paul Wellstone’s autobiography, she is NOT a liberal (And yes, I understand maybe only three of my readers got those references). I gotta take my hat off to her, she is trying so damn hard to be a liberal. Maybe somehow all of this leftward movement will lead to a more liberal Presidency from her. I sure hope so.

— I really don’t know why Bernie isn’t making inroads with minorities. He’s so, so much more progressive on issues like police brutality, incarceration, and unemployment than she is. He’s done a hell of a job getting this far and scaring Hillary so much, but I think Bernie’s got about 2-3 more good weeks left. 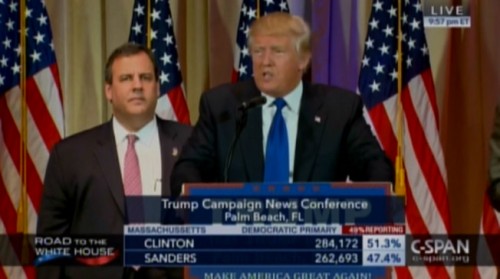 — So… Trump. Let’s forget for a minute the improbability of a slick, fast-talking con man from New York winning primaries in the Deep South. And forget that it looked like Chris Christie was making a hostage tape while introducing Trump, then staring up at him from behind for 20 minutes (“Seriously Governor, blink three times if you’re being held against your will” was a popular Twitter comment made by many).

I have to admit it was brilliant stagecraft for Trump to hold a press conference and not a pep rally. He actually seemed calmer and almost rational for a few minutes, but then he reverted back to his old self (he basically threatened the Speaker of the House, Paul Ryan, that he better get along with President Trump or “he’s going to pay a big price.”)

He was trying to seem Presidential, and it almost worked. I got a little scared.

— I’m finally giving up on Rubio. I’ve been saying for months he’d be the nominee, but the dude just cannot win anywhere. His speech Tuesday night, saying we’re getting closer and Trump’s numbers are falling, was pathetic. He did finally win something late, Minnesota. Way to go, Marco!

— The GOP elite have a real problem: The one guy who’s beaten Trump, Ted Cruz, is the most hated man in Washington, by Republicans. Can they really swallow their hatred and support him to ward off a Trump landslide defeat in November?

— And finally, I watched MSNBC most of the night and can someone tell me how Brian Williams so easily got his reputation back? I mean, hasn’t he lost all credibility as a newsman?

— Sorry, one more thing: Anyone know if Ben Carson is still alive?

**Finally today, I haven’t featured one of these in a while but they always make me laugh. In honor of Sunday’s Academy Awards, Jimmy Kimmel offered up his latest edition of “Mean Tweets,” where celebrities read out loud the horrible things said to them on Twitter lately.

This is the all Hollywood edition; I think Susan Sarandon’s response was the best, at around 1:05…