“The Daddy Chronicles” returns, as my almost 2-year-old boy gets obstinate and “no” becomes his favorite word 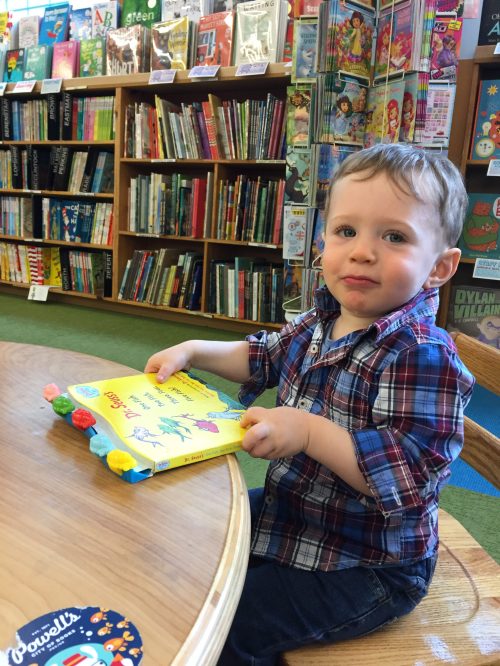 And a Happy Friday to all of you out there on the Interwebs. It’s Friday but it’s also Father’s Day Weekend (is that a thing?), which for the second year in a row has special meaning for me.

Been a little while since I’ve written a post about my little guy who’s not so little anymore, so I thought today was the perfect time for it. As my boy gets closer to being 2 (he turns 2 in September), he’s changing all the time, some for the better, some for the, eh… not so much better.

But he’s still the best, sweetest, most lovable boy in the whole world, and I’m still the luckiest guy in the world that he calls me “Daddy.”

— So I wrote a little bit about Nate’s behavior on our recent two-week trip in previous blogs, but one thing I forgot to mention was the freakiest thing he did.

Our second-to-last night in Seattle, we were walking back into our hotel from dinner. I was walking about five feet ahead of my wife and Nate because I needed to ask the front desk a question. As I walk into the lobby I see a small dog, off leash, and an owner walking right behind him.

As I got to the desk, all of a sudden I heard this Barry White-like gutteral “woof, woof” coming from behind me. I turn around and my little guy, who has seen 100 dogs in his life and never made a sound, is suddenly barking over and over at this 10-pound pooch. I wasn’t sure whether to laugh or be frightened that my son’s body was being inhabited by an animal. He kept barking for, like 10 seconds, the dog seemed fine with it, and then walked toward Nate and rolled over, so he and my wife could scratch his belly.

Ten seconds later, the whole thing was over and we looked at each other like “What the hell was that?” He has yet to bark at another dog since.

— The “Terrible 2’s” haven’t quite arrived, but they’re definitely on the radar. Nate is getting very obstinate and throws mini-fits when he doesn’t get his way, usually when Daddy closes the refrigerator before he’s done taking everything out and shaking it. He for some reason hates getting changed lately, and he really doesn’t like it when he wants to run somewhere and we don’t let him. But happily, his tantrums last about a minute, then he gets placated by something else. 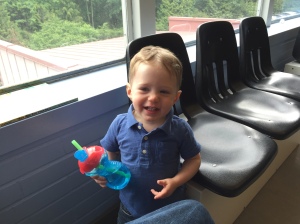 — My child loves pizza, but somehow the pizza he ate in Portland, which he devoured completely, is the best he’s ever had. It’s the only time he’s ever finished a whole piece. I’m sorry, but if this kid thinks Oregon pizza is better than New York pizza, we may have to exchange him for another.

— It’s been really funny watching his verbal evolution on what he calls us. First he only said “Da”, and not Ma at all. Then it was both “Da” and “Ma,” and occasionally “Da-da.” Now he’s evolved to only saying “Mommy” and “Daddy.”

— His morning routine now includes him walking over to his mother’s iPhone, pressing the home button for five seconds, then happily shouting “Hi, Siri!”

— Unloading the dishwasher continues to be, by far, his favorite activity. I literally say the word “dishwasher” and he takes off sprinting at full speed. He gets SUCH joy out of handing me forks, knives and plates. I have no idea why, but he does like to be helpful. He also still loves helping load the washing machine, and bringing everyone their shoes when it’s time to go outside.

The other day he tried to bring me his shoes AND my shoes at the same time until realizing his little hands aren’t quite able to do that yet.

When he dropped two of the shoes, he looked down all disappointed. But it was a good effort and hey, he just wanted us to get outside quicker!