The Japanese invent a chair that moves you while in line. A great “accidental” photo bomb by 2 hockey players in the penalty box. And the 400 students who sang to their cancer-stricken teacher

Spare some thoughts and prayers today, please, for all those in Florida and Georgia who are about to get hit with maybe the “worst storm in decades.” I have so many friends down there, I’m going to be worried all day about them. This storm is no joke…

So you’re waiting on line at the supermarket or on line waiting at the DMV or on line at an amusement park. You’re aggravated the line is so long, your feet hurt, and you’re wondering: Wouldn’t it be great if I could just sit down and still move forward in the line?

But short of living in The Jetsons, you don’t really know how this problem could be solved.

Enter the beautiful engineers of Japan, who are solving problems we didn’t even know we had. Prepare yourselves for the new self-driving chair! Yep, car company Nissan has invented a device with autonomous technology that detects the seat ahead.

According to this story in the Daily Mail, when the person at the front of the line is called, “the empty chair at the front can sense it is empty, so moves out of pole position. Cameras on the remaining chairs then sense the movement and follow automatically.”

The system, which is similar to the kind used in Nissan’s autonomous vehicle technology, will be tested at select restaurants in Japan this year, Nissan said.

This is my favorite part of the story: “It appeals to anyone who has queued for hours outside a crowded restaurant: it eliminates the tedium and physical strain of standing in line.”

Here’s a video of how it works:

OK, first of all, if you’re spending hours waiting outside a restaurant, you know how to solve that problem? EAT SOMEWHERE ELSE. Also, this could totally solve a different issue. If you’re afraid not enough people think of you as a pompous douchebag, show up somewhere with one of these. Problem solved!

You know, Americans sometimes get accused of being lazy. But hey, at least we didn’t invent this.
Still, it is pretty cool, and hey, if it makes life a little easier, then that’s good news. 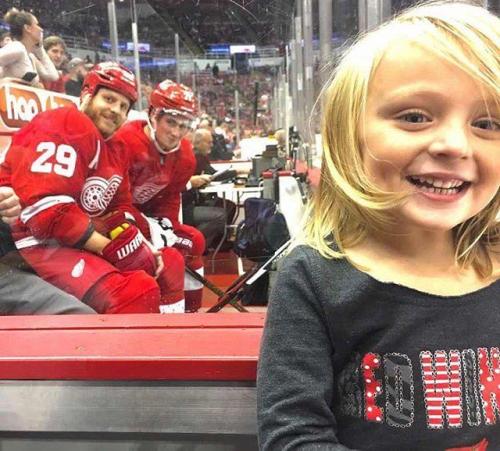 **Next up today, there are few things in sports more boring than preseason ore exhibition games, and I think the athletes that play in them know it, too.

Which is why I think these two Detroit Red Wings players in the penalty box, Steve Ott and Dylan Larkin, clearly ignored the game and executed an all-time great photobomb last week.

A little girl at the game, 4-year-old Lylah Almas, was told by her parents to stand in front of the penalty box. Larkin and Ott noticed and decided to have some fun.

**Finally today, this warmed my heart. A popular teacher at Nashville’s Christ Presbyterian Academy, Ben Ellis, is suffering from cancer.

Hundreds of students showed up outside the Nashville home of Christ Presbyterian Academy teacher Ben Ellis to play instruments and sing for him.

Ellis has been teaching at the school since 2008 and was diagnosed with cancer last year.

It was one of the most beautiful things I’ve ever seen in my entire life,” Nate Morrow, headmaster at Christ Presbyterian Academy in Nashville, Tennessee, told ABC News.

“He is one of the kindest and intentionally loving people I’ve ever met in my life,” Morrow continued. “I think that’s what really characterizes him. He’s always pursuing other people in wanting to get to know them and love them.”

So, so great. Yes I know it’s a religious song and maybe that’s not your thing, but I’d rather focus on so many students doing something great for a teacher they love.