Patti Smith does an incredible Dylan cover at the Nobel Prize ceremony. A woman dying of cancer kicks ass on “Jeopardy.” And a community that has embraced Muslims, not targeted them

As a rule, I’m generally against covers of classic songs. But there are glorious, wonderful, transcendent exceptions to every rule.

Bob Dylan was officially awarded the Nobel Prize for literature last weekend in Stockholm, Sweden. He did not attend, because he’s Bob Dylan and he doesn’t do normal things.
He asked the legendary Patti Smith to go in his place, and sing his beautiful “A Hard Rain’s Gonna Fall.”

She did. She messed up a lyric at first, admitted she was nervous, then performed one of the most fantastic, moving covers I’ve ever heard.

The lyrics to this are prescient, of course, but her voice, the message, the stillness of the crowd… just so beautiful. Hope you enjoy it as much as I did.

**Next up, this beautiful and tragic story that unfolded on “Jeopardy” Tuesday night snuck up on me. Months ago, a woman named Cindy Stowell was diagnosed with Stage 4 cancer and was given just six months to live. She desperately wanted to compete on “Jeopardy, though, and once she qualified, producers of the show moved up the normal taping schedule to make sure she got to realize her dream.

Her episode was taped in August, and she won $22,801, which she promised to donate to cancer research. Her boyfriend Tweeted before the show aired that Cindy “was fighting a high-grade fever (which turned out to be a blood infection) and was on painkillers while taping.”

Eight days ago, Cindy passed away. Her first episode aired Tuesday night. Her fellow contestants did not know she was sick.

It’s a tragedy, of course, but I’m glad she at least got to live out one final dream. 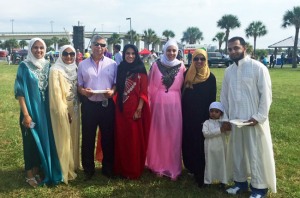 **And finally today, I don’t hype my freelance stuff on here that much, because, well, I don’t know why. But this story I wrote for FlaglerLive.com was a story I was proud of, because it showed that there’s still plenty of places in America, despite Donald Trump’s best efforts, where Muslims can be treated fairly and well.

In Flagler County, Fla., very near where I used to live, between Daytona Beach and Jacksonville, there have been dozens of Muslim families moving into the community over the past 25 years. And despite tales of Muslims being absolutely terrified or feeling ostracized, Flagler County has completely welcomed and embraced them.

I interviewed some of the Muslim families who live there, and they were uniformly unable to come up with any negative feelings or actions they’ve felt. They are normal, productive members of the community, blending in with everyone else. Even after 9/11, even after the last two years of Muslim-bashing by Trump and so many others, Flagler County residents have treated these families like their own.

Just a reminder that there are plenty of tolerant, welcoming communities still out there, who don’t believe that hate trumps all.