The new Doritos bag that can tell if you’re drunk. A 6-year-old aces the NHL All-Star Game. And the raven that swooped in and stole a parking ticket 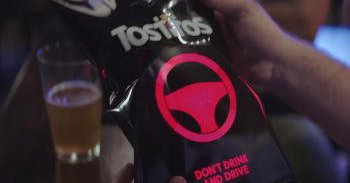 I need a breather. I need some time away from the insanity of the last few days in politics and in our world. A break from screaming at my fellow Democrats on Twitter and elsewhere to grow a spine and filibuster the ever-loving hell out Cheetos Jesus’ Supreme Court pick, who is being described as another Scalia clone (because that’s what we need). Only thing I’ll say today is I was wildly encouraged by this short video of the UK Parliament discussing our President’s upcoming visit, and the bluntness and strong points made by so many of them.

So a few fun/bizarre stories today that won’t tax your brain too much.

First up, and this absolutely sounds like a fake thing but apparently it’s real: Pretty soon your bag of snack chips will be able to tell you if you’re drunk.

According to this story in Fortune.com, in a partnership with Uber and Mothers Against Drunk Driving (MADD), Frito-Lay’s Tostitos has created a limited time “Party Safe” bag—one that is equipped with sensors and can detect any trace of alcohol on a person’s breath, USA Today reports. If the bag detects alcohol, a red light will flash below the Tostitos logo on the bag, and the message “don’t drink and drive” will appear. If a snacker is good to go, the light will flash green.

That’s pretty freaking amazing, right? I mean, sure most people can drive if they’ve had one or two beers, but a bag of chips telling you if you’re a little wasted?

If the bag flashes red, it will also display a $10 Uber discount code to help get that person home, according to USA Today. The bags also are fitted with a technology called near-field communications (NFC), which means users can touch their phone to the bag to call Uber.”

Ladies and gentlemen, we have entered “The Jetsons” territory. I think this is a brilliant idea and could lead to some wonderful arguments at the Super Bowl.

“All right, I’m leaving. Thanks for having us over.”
“Excuse me, you’re not going anywhere. Go blow into that bag of chips.”

Then two guys argue over whether the light went on or not. What a time to be alive!

Then again, as the Lawrence, Kan. police department Tweeted, “If you can only tell if you’re drunk or not by blowing into a bag, FOR ALL THAT IS HOLY, DON’T DRIVE!”

**Next up, this was all kinds of adorable. NHL star forward Ryan Kesler’s 6-year-old son Ryker is a pretty good little hockey player, and at the otherwise-useless NHL All-Star-Game last weekend, Ryker got a chance to participate in the skills competition. He went 1-on-1 with top goalie Carey Price, and scored. The celebration is the best part.

**Finally today, this is the best excuse to get out of a parking ticket I’ve ever heard. A Canadian town is making a driver pay for a ticket despite, and I’m not making this up, a security camera in the lot showing a raven swooping down and snatching the ticket before destroying it.

Yep, the town of Yellowknife has some mighty fierce birds who are fed up with the citizens of that burg having to pay parking tickets.

So a raven swooped down and took care of it.