“Murder on the Orient Express” surprisingly really good. Break up the Jaguars and Rams, and NFL instant replay is the worst. And as Christmas nears, my favorite Xmas song is in my head 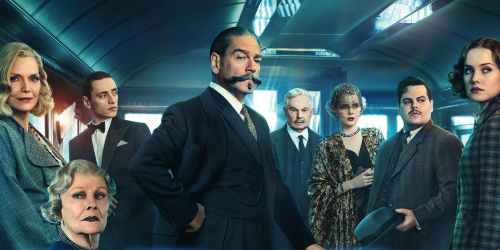 It’s December, so among many other things that means, it means I see more movies in a month than I see the rest of the year.

My reasoning is that almost all the best movies seem to come out between Thanksgiving and New Year’s, I really don’t like schlepping to the theater and paying $18 to see garbage flicks, and there are always 3-4 movies out around this time that look right up my alley.

So recently my lovely wife and I started our December movie binge by seeing “Murder on the Orient Express,” which I had very low expectations for. It’s not the kind of movie I normally like, I hadn’t seen the original 1974 classic so didn’t know the story (nor had I read the Agatha Christie story it was based on), and my beloved was way more excited to see it than I was.

Honestly, what I was most excited about that night was that we were seeing it in a theater with those cool new reclining chairs that basically make you feel like you’re watching a movie on your couch (they’re pretty awesome if you haven’t been in one at a theater yet).

But happily, I was pleasantly surprised at how good the movie was. Starring Kenneth Branagh, Michelle Pfeiffer, Willem Dafoe and others, it’s a terrific film. Branagh plays Poirot, a mustachioed brilliant detective who solves crimes others cannot. Branagh hams it up throughout the movie and almost ruins it that way, but fortunately the story and cast are so strong he doesn’t overwhelm the film.

Taking place on a famous, luxurious train, the story follows the investigation into the murder of a wealthy criminal (Johnny Depp) by Poirot. Everyone is a suspect, and you’re sure at least a half-dozen times that you know who did it, but then something happens and you’re clueless again.

The acting, especially by Pfeiffer, surprisingly, is excellent. The script crackles with one-liners and the scenery is sensational.

**Next up today, I briefly found myself at a giant shopping plaza on Long Island Sunday, eight days before Christmas. As you can imagine, there are war zones in the Middle East that are less chaotic than the parking lot I saw. Just pure madness. So of course, when I encounter a scene like that, I think of my favorite all-time Christmas song, which I try to highlight every year here on World Wide of Stuff. I love No. 2 so much. Here it is, The “12 Pains of Christmas” by the Bob Rivers group…

**Finally today, NFL football is starting to get real interesting with only two weeks left, and Sunday brought a few sensational games, including, surprisingly, the horrid Giants against the best team in the NFC, the Eagles. Somehow the Giants almost won, though I continue to wonder: What the heck is Eli Manning still doing playing QB in these games? The Giants are 2-12, going nowhere, have a young, untested QB on the bench in Davis Webb, and yet continue to trot Eli out there when the season is lost.

Makes no sense to me. Seems like something my Jets, or the Browns would do.

— Couple stunning results Sunday: The Rams not just winning, but walking into Seattle, the toughest road stadium in the NFL the last 10 years, and winning 42-7. Forty-two to seven??? Incredibly rare to see the Seahawks spanked like that.

— And the Patriots, damn them, once again going into a hostile environment, getting beat up all day, then winning at the end. Of course it took another controversial instant replay reversal of an apparent winning TD catch by the Steelers (above) to help New England, and honestly I’d scream and yell about injustice today if I were a Pittsburgh fan but there have been so many of these terrible replay reversals, just about every fan base in the NFL could point to one. The “catch” rule in the NFL is impossibly stupid.

— Sucks to be a Raiders fan today. Another crazy finish Sunday night, as Derek Carr races for a game-winning touchdown in the final seconds against the Cowboys, then fumbles the ball through the end zone while reaching for a score. This is another rule that I don’t understand in the NFL: You fumble while trying to score and the other team gets the ball? It’s been that way forever so nobody questions it, but it seems silly to me.

— Also crazy from that game? Check out the 7:05 mark from this video, as an NFL referee used a piece of paper to determine if the Cowboys made a first down. It’s 2017, the NFL is a billion-dollar industry, and an index card helped officials Sunday. Insane.

On the other hand, it’s a good thing someone stopped at Staples before the game, otherwise they might still be arguing about that first down.