Good News Friday: The kid baseball pitcher who won the game but consoled his best buddy on the other team first. A teenage inventor has a way to make school shootings safer. And a doggie at a baseball game has a good time.

When consoling a childhood friend is a little more important than immediately celebrating a trip to the state championship.

Happy Friday to you all! After celebrating the 24th anniversary of the Rangers winning the Stanley Cup on Thursday (I celebrated by packing everything I own into cardboard boxes during final preparations for our move), I’m in the mood today to salute two enterprising young people, and a pretty frisky doggie.

First up, this went viral this week for all the right reasons. In a Minnesota state high school sectional title game, Totino-Grace and Mounds View were playing for the right to go to the state tournament.

Mounds View pitcher Ty Koehn has protecting a lead in the final inning when he struck out Totino-Grace’s Jack Kocon, clinching the win for Mounds View.

But while Koehn’s teammates celebrated around him, the young pitcher did something wonderful: He walked directly to home plate to consol his friend Kocon.

We are very close friends,” Koehn told Bring Me the News. “I knew him from all the way back when we were 13. We were on the same little league team. It was tough when we went to separate schools but we kept in touch.”

That humanity is a beautiful, and all too rare thing to get highlighted in sports. Here’s what Koehn also said.

I knew the game was either going to keep going or going to end right there,” he added. “I knew I had to say something. Our friendship is more important than just the silly outcome of a game. I had to make sure he knew that before we celebrated.” 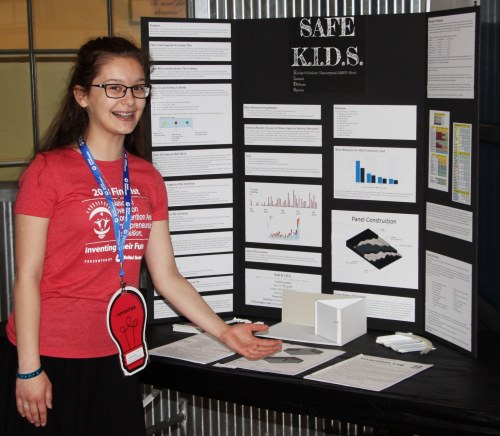 **Next up today, I absolutely hate that something like this is needed, but I’m amazed at the ingenuity of the child who invented it.
Meet Audrey Larson, a 14-year-old from Wallingford, Conn.
According to this story in the New Yorker, this weekend, Audrey will compete in the National Invention Convention & Entrepreneurship Expo, in Dearborn, Michigan, where she’ll début her latest idea: a wall-mounted shield designed to protect students from active shooters invading their classrooms.
She’s a kid inventor but with terrific ideas; she’s been inventing stuff since she was 7 (my favorite invention is her “glow jamas”, pajamas that light up when you turn them on for when you have to go to the bathroom at night).
She lives 40 minutes from Sandy Hook, so of course the school shooting there in 2012 impacted her.
Larson’s new invention is called Safekids, which, in her words, is “a foldable bulletproof panel designed to protect students and teachers from an active shooter.” The acronym stands for Kevlar-cellulose-nano-crystal-AR500-steel Instant Defense System.
From the terrific New Yorker story:
“I wanted to look at the problem differently, in a non-political way. That’s when the idea really sprouted. I started doing drawings,” Larson said.
At school, people were discussing lockdown procedures, and how to improve them. “Normally, you hide in the corner away from windows and doors, where you’re least likely to be spotted,” she told me. “I didn’t think that was really effective. There had to be a better way.”

The floor-to-ceiling panels, which create a bulletproof space once unfurled, are folded against the wall when not in use. “It doesn’t take up any space, because most schools don’t have the biggest classrooms,” Audrey said.

Like I said, I absolutely hate that something like this has to be invented. It’s absolutely disgraceful how our politicians refuse to do anything useful to stop school shootings.

But kids like Larson are doing what they can to help, and I salute her impressive invention.

While at the (@TulsaDrillers) game .. dog night at the park .. one dog saw a ball .. and go figure. #Dogs pic.twitter.com/6ws99cEQqR

**Finally, a dog at a Tulsa (Okla.) Drillers minor league baseball game got to run around the field before the game with other dogs. And, well, infield practice was going on and you know how a dog gets when he sees a ball…

I just thought this would bring a smile. That doggie was determined!