A television post: “This Is Us” is having its best season ever, with Vietnam as a backdrop. “Homecoming” is dark, mysterious and great. And Dylan joins Jimmy Fallon at the circus 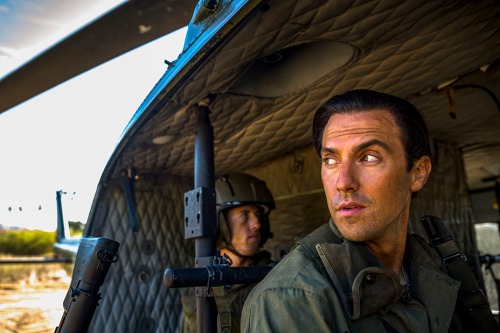 Haven’t done a TV post in a while, but wanted to weigh in on two outstanding shows we’re currently watching.

First, when I heard that “This Is Us” was going to be doing a Vietnam storyline this season, with the dual pegs of us learning exactly what happened to Jack Pearson and his deceased brother in the war, and seeing son Kevin Pearson go over to Southeast Asia in the present to find out exactly what his father had been hiding all these years, I was dubious.

I mostly love the show, for it’s sharp writing and acting, but the Kevin character has always struck me as obnoxious, and Kate’s storylines tend to be so self-involved and one-note (her weight problem).

But then I read that Tim O’Brien was brought on as a writer for the Vietnam stuff, and I immediately got excited. For those who don’t know, O’Brien wrote maybe the best book ever about the Vietnam War, “The Things They Carried,” about his experiences as a soldier there. And I know if O’Brien was involved, they’d get the details and tone right.

And they absolutely, totally have. This has been the best season so far of “This Is Us,” and not just because the plot of Jack in the war in real-time has been so fantastic. We see Jack trying valiantly to keep his brother Nicky out of Vietnam in the first place, once his lottery number is drawn, and we get great backstory of how Jack always protected Nicky when they were kids.

But Nicky, on the way to draft-dodging his way to Canada, decides to go to Southeast Asia and of course things don’t go well. The acting and writing in these scenes have been fantastic.

The rest of the show has been very solid too; I’m enjoying seeing Beth struggle for the first time, and the Randall-running-for-Councilman storyline, while giving me some flashback nightmares to “Parenthood” Monica Braverman running for Berkeley mayor ridiculousness, has been interesting on the strength of the awesome actor Sterling Brown.

Even last week’s Thanksgiving episode, which was all over the place in storyline, was touching and emotional giving us glimpses of Miguel’s family and backstory.

“This Is Us” still has some problems, but it’s been incredibly strong this year.

**Next up, Jimmy Fallon does a fantastic Bob Dylan impersonation, but having the real guy on your show is always better. In this sweet, short skit, Dylan joins Fallon at a private performance of the the Big Apple Circus.

**Finally today, the other show we’re totally digging lately has been hyped by TV critics and friends of ours alike, the new Julia Roberts show on Amazon Prime, “Homecoming.”

It’s basically two different shows, kind of: In the “main” show, we see Roberts as a counselor/therapist in a Dept. of Defense program called Homecoming, which helps soldiers returning from war zones re-adjust and process everything they’ve been through, in a sterile, college dorm-like setting.

In the other show, we see Roberts four years later, as a waitress in her hometown struggling to remember or explain what she did while part of the program.

It’s not an easy show to watch, but it’s damn compelling (we’re about halfway through the 10-episode season) and I’m very curious to see where it goes. Stephan James is fascinating as Heidi Bergman’s (Roberts) patient Walter Cruz, and while he hasn’t gotten to say much, Shea Whigham’s investigator Tom has been very good, too.

One response to “A television post: “This Is Us” is having its best season ever, with Vietnam as a backdrop. “Homecoming” is dark, mysterious and great. And Dylan joins Jimmy Fallon at the circus”