A great profile of The Boss, as Springsteen’s Broadway show hits Netflix. The “Silent Night” game at Taylor is still awesome. And an Army-Navy game promo will give you chills.

One of the sports holiday traditions i love most is the one I’ve highlighted here before, at Taylor University in Upland, Ind. It’s called their annual “Silent Night” game, and the strange way it works is this: The entire crowd stays silent for the first few minutes of the game, until Taylor scores its 10th point. Then, on cue, hundreds of students, dressed in wild costumes, rush the court and celebrate making as much noise as possible.
Then they retreat to the stands to sing “Silent Night” while linking arms and swaying.
After that, the game continues.

It’s so nutty, so full of joy, and so… different that it’s something I look forward to every year. Above is a story on this year’s game, and here’s a clip of how the celebration looked from inside the gym. 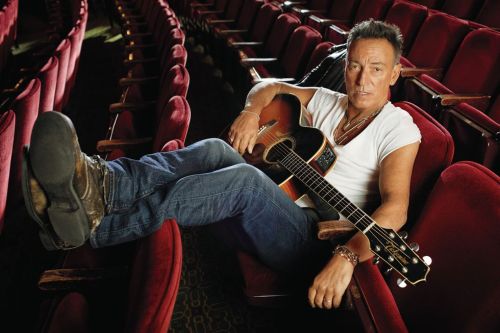 **Next up today, Bruce Springsteen. He’s a God among us, and the latest proof is his Broadway one-man show, which I never got to see because I only have one kidney and can’t sell it to raise money to buy tickets to see it, which are astronomical.

The Broadway show was videotaped and will be available on Netflix on Dec. 15, and before watching it I urge you to read this sensational profile of the 69-year-old Boss, by Michael Hainey in Esquire.

Just one passage among many great ones here:

And there it is: Bruce, no longer the son of scarcity but rather the father of abundance, reclaiming the kitchen for his family; transforming it from a fortress of darkness and silence into a land of brightness, filled with the sounds of life. Sitting here with me now, talking about his brood, he radiates joy. A father, proud of his children, grateful. I ask him, considering the current environment, what kinds of conversations he and his family are having around the kitchen table; what it means to be a man in society right now.

But what would you say if you had to give advice to someone raising sons today?

“Be present. Be there. If I have any advice to give, that is it. I mean you have to be fully present in mind, spirit, and body. And you don’t have to do anything. [Laughs] I mean, you get a lotta credit just for showing up. Just by being present, you guide them. My children are transitioning into adulthood. But I’ve found my presence still carries a great deal of weight—on that rare occasion now when someone actually still asks me a question. [Laughs]”

It’s a great, introspective look at a man who keeps living his best life and isn’t afraid to admit to his battles with mental illness and demons that keep him up at night. Fascinating story, really.

**Finally today, the Army-Navy football game was last Saturday, and as usual, the result of the game was hardly as significant as the pride so many feel at honoring the hard work these men and women put in, all in service to our country.
CBS, as always, put together a fantastic, chill bump-inducing promo video before the game, and I just got around to watching it Tuesday. Just spectacular stuff…

One response to “A great profile of The Boss, as Springsteen’s Broadway show hits Netflix. The “Silent Night” game at Taylor is still awesome. And an Army-Navy game promo will give you chills.”