A new edition of the Daddy Chronicles, starring a 4-year-old who is not exactly “tough,” and a 14-month old smiling destroyer 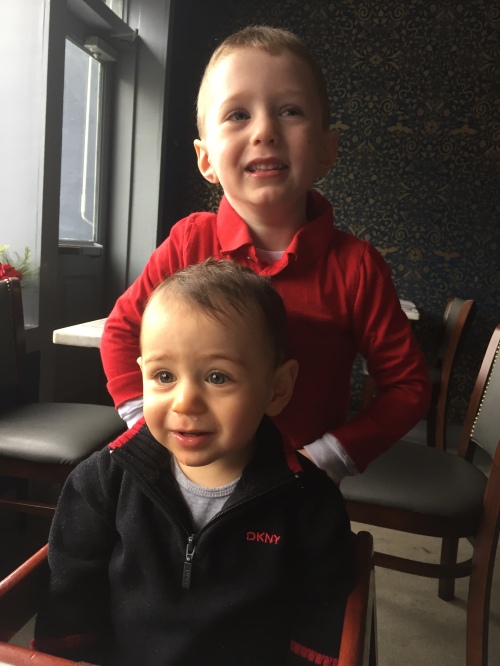 All right, it’s the first Friday of 2019, and I’m in the mood to share some family joys and triumphs, some frustrations and some laughs, some details that will surely embarrass my offspring a decade from now when their friends discover this on the Internet.

Yep that’s right, time for another edition of the Daddy Chronicles. I was just looking and noticed that the last two kid posts have been letters to my boys on their birthday, so it’s been quite a while since I’ve written about their lives. And oh boy, there’s a lot to share, as my 4-year-old, Nate has firmly reinforced his reputation in some ways and invented new behaviors in others, while 14-month -old Theo is becoming a little boy way too fast, and loves to smile while he destroys things.

— OK, so let’s start with the big brother, Nate. He’s shown great progress in so many ways the last six months or so; his vocabulary continues to grow by leaps and bounds, he’s actually doing some addition and subtraction in his head now (go, preschool teachers, they’re doing a great job!) his handwriting may already be better than mine (not saying much, I know) and he’s an all-around great kid.

But the tears. Oh, the tears. He cries over everything. I’m telling you, Meryl Streep in “Sophie’s Choice” didn’t cry as much in the whole movie as my 4-year-old does in a week. Every little thing, whether he’s mildly hurt himself, is angry about not getting his way about something, or just is upset in general, leads to weeping.

Parents of older kids tell us they’ll outgrow this. I sure hope so, otherwise I’m buying a whole lotta stock in Kleenex.

— Nate is a wonderful big brother, a caring and sensitive friend to all, and most of the time a really obedient son. But man, when he digs in and doesn’t want to do something, the army of a mid-sized nation couldn’t get him to budge.

Back in the fall he came down with an ear infection. Not a big deal for 99 percent of 4-year-olds. We went to the doctor, she prescribed an antibiotic, take it for a week, boom, you’re done.
Except my first-born only likes certain medicines, like Claritin or Benadryl. Hates almost everything else. So he absolutely refused to take the antibiotic, throwing an enormous fit each time we tried to have him take it.

I had them make it grape-flavored, just like he likes it. Wouldn’t drink it. We tried putting it into his milk, and his food, and hoping he wouldn’t notice.
Nope, he refused. We bribed him, we begged, we tried the “sneak-attack” routine where I snuck up on him and tried to shoot it into his mouth, we pleaded, we even (and I’m not proud of this) literally held him down, pinched his nose, and tried to force the medicine down his throat.

Nothing worked. And his ear still hurt a lot. Finally, after we were seriously considering having the doctor give him an “antibiotics shot” which is like a last resort, the infection went away, and he’s been fine since.

But man oh man, I do not want to go through that again. Hoping and praying he matures in this area before the next illness.

— So I’m sure most of you have heard of Alexa, the Amazon intercom/information device that millions of people, including me, have bought and ingratiated into their lives. We’ve got a bunch of them in our house (much better than screaming from the ground floor to the top) and it really has almost become a family member, so much so that the little guy Theo points at it sometimes and says “eh, eh” because he knows it talks.

We use it for so many things, but nobody loves it like Nate. He plays his favorite songs on Alexa, uses it as a timer (when I tell him he has five more minutes to play before coming up for dinner, he’ll tell Alexa “Alexa, set timer for five minutes,” and, in my absolute favorite use, every morning before getting dressed, he asks Alexa what day it is.

This is so he knows which pair of his Days of The Week underwear to put on. (He can’t read the words, but he’s memorized which color goes with which day).

Ah, Alexa. Who knew you’d be used for such an important piece of info? 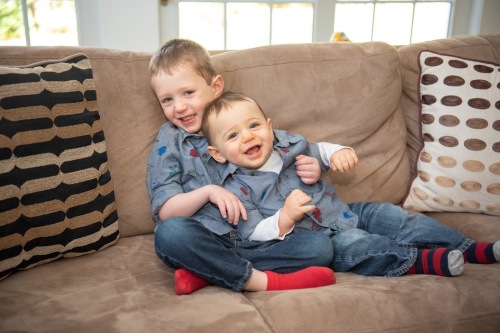 — The other really funny thing about Nate lately is his confusion about Christmas lights. We live in a mixed neighborhood; lots of Jews, lots of Christians. And we have some friends whose Christmas tree we always help decorate every year, and this year he was happy to take part.

But then on the way home from doing that, as we saw lights up around our neighborhood, he blurted out “We have to put up OUR Christmas lights soon!”

— OK, on to the little guy. Theo is crawling like a speed demon these days, doing everything involved in walking except, you know, actually doing it (he takes a few sideways steps, then falls down). He’s the happiest little guy we’ve ever seen, whether it’s eating (still a champ at that, and we’re still waiting to discover the first food he doesn’t like) and he’s a joy to be around.

— But the destruction and havoc he causes. So much destruction. He loves knocking down everything in his path, reaching and destroying things we didn’t know he could reach, and hitting his parents and his brother while smiling and giggling so much.

And the first few times he did it, hitting us in the face while laughing, it was funny. But the little pisher weighs 25 pounds now, and is getting stronger every day, and getting conked by him constantly has ceased being enjoyable. He’s loosened my teeth with a few “head raises to my jaw” and his hits seem to be getting harder.
We try scolding/correcting him, we try ignoring it, but he just keeps doing it. He’s just so darn happy to get a reaction out of us, my wife thinks, that he keeps doing it.
Fortunately, he hasn’t truly hurt anyone yet. But while I know the destroying stuff in our house phase will last a while, I really wish the hitting would go away soon.

— Finally, it’s been heartwarming and a little strange seeing our second child start to illustrate the same behaviors as our first at the same stage. Simple things like Theo waving at every person he sees, starting to hand me his bottle or cup when he’s done with it, or suddenly becoming obsessed with shoes, are all behaviors we saw with Nate. It’s like we’ve created a little factory of tiny blonde boys who all act the same.

It’s kinda cool. But a little weird, too.