A new edition of the Daddy Chronicles, with thoughts on what makes a person like a certain song, a toddler who stands uncomfortably close to teachers, and a budding train engineer

And a Happy Friday my fellow denizens of Earth! A decent night of Sweet 16 games last night, highlighted by that insane Tennessee-Purdue game, won by the Boilermakers in OT.

It’s been a few months since I’ve done a Daddy Chronicles, so with so much going on with my boys I wanted to get it all down before things changed again, if that makes sense.

Anyway, hope you enjoy reading these half as much as I enjoy writing them. Time to dip into the waters of a pre-K boy with way too much to say, and a toddler who wants to say so much but can’t quite do it yet…

–OK so this has been on my mind for a while, and it fascinates me, and I’ve spent hours, literally, thinking about it. So Nate has gotten more and more into music over the past few months, and so like a good Dad I’ve tried to expose him to all kinds of music that I like.

And without fail, no matter what song he’s never heard comes on the radio or I play from my phone, within five seconds he’s decided if he likes it or not.

Literally, five seconds. With “New Sensation” by INXS, he liked it within four seconds. With “Wish you Were Here” from Pink Floyd, loved it in five seconds. But with “Hotel California,” I got a scream from the back seat of “I don’t like it!” within a few beats. Same with “Raspberry Beret” by Prince: Not for him.

And it got me to thinking: How does he know that fast that he likes it or not? Is there something in the guitar chord, or the sound of the lead singer, or the way the drums hit his little ears? I mean, as an adult, if I’m confronted with an unfamiliar tune, I’ll give it a minute or two, hear the lyrics, and all that.

But with Nate, it’s instantaneous. And scientifically, I really am curious as to how that works. Any of my readers who happen to be pediatricians or experts in music, please fill me in.

Because I REALLY want my boy to like “Hotel California,” dammit. 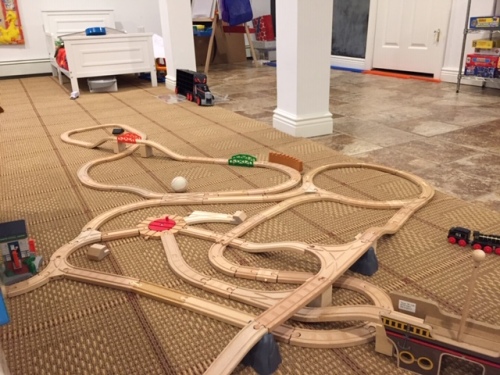 — So a couple more Nate things the last few months. First, my boy has become a little John D. Rockefeller, or more accurately, Frank Lloyd Wright or something, because Nate is obsessed with building and re-building his train set. He knows exactly what he wants to do, makes it perfect, then takes it apart and makes it differently.

It’s a whole new world for me, learning about switches, and supports, and curves, and all this train lingo that my son suddenly knows by heart. And also, I’ve learned that it’s possible to “play with trains wrong,” because several times in the past month he’s told me I’m doing it incorrectly.

Thank God I have him to teach me.

But seriously, the kid seems really good at the mechanical brain stuff, which is 100 percent genetically, from my wife.

— The other change in Nate has been his love of Uno. You remember Uno, right? The card game with the multiple colors, sorta like Crazy Eights? I’ve played it more in the past month than in the previous 40 years of my life. He wants to play morning, noon and night. And so we have. He promised us we’d “take a break” from Uno a few weeks ago.

That lasted one day.

— As for our newest model, Lewis child 2.0, Theo is growing every day, mostly in his belly since the little pischer never stops eating. If you don’t have food in front of him immediately at all times during meals, he takes it as a personal affront and wails to a degree I’m not sure any opera star can reach.

But that’s mostly normal, I think. What creeps me out a little (though other people think it’s adorable) is how at every one of our classes we take together he now stands insanely close to the teacher.

Whether it’s at music class, at story time at the library (above) or in his little gym class, my second son wanders up to the grown-up in charge, gets about two feet away from them, and just… stares. Not upset, not asking for a hug from them, just kinda, you know, staring at them as they do their thing.

This goes on for 10, 15 minutes at a time sometimes. I’m guessing he just finds grownups other than his parents endlessly fascinating. And the teachers don’t seem to mind, thankfully.

I hope he doesn’t grow up to be a “close talker” like Judge Reinhold’s character in “Seinfeld.”

— Also new for Theo: Frantically waving goodbye to people, often long after they’ve actually left the room; saying “Dada” and maybe “Papa” (his Papa Steve is SURE he’s been saying this for months, and now he might actually be right); and finally, Theo has become a big fan of taking all the books off his shelves, then trying to rearrange them, quite unsuccessfully.

Hey, it’s an acquired skill. He’s also become fond of “knee-hugs,” where he runs to people he likes (fortunately I’m one of them) and throws his arms around their knees, since that’s as high as he could reach.

“Knee-hugs” are now my favorite thing, ever. Being a Dad is just the best!

One response to “A new edition of the Daddy Chronicles, with thoughts on what makes a person like a certain song, a toddler who stands uncomfortably close to teachers, and a budding train engineer”