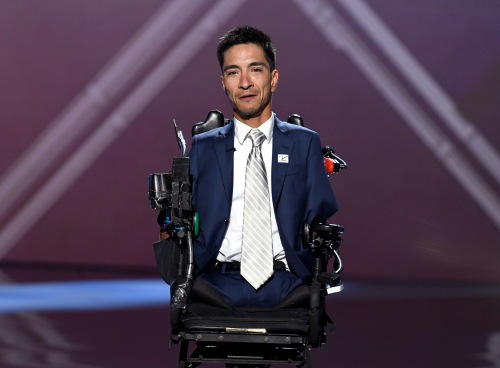 Happy Friday, Earthlings and other creatures out there who might be reading this. Hope all is well with you, Thursday was my (drum roll please) 10th anniversary of Wide World of Stuff, which makes me feel old and young at the same time.

As I’ve mentioned this week, next week is gonna be a little different here; I’m going to be re-running five of my favorite/most popular posts from the last decade, ones you may have missed, or ones you enjoyed and hopefully will want to read again. So instead of my usual Monday/Wednesday/Friday schedule, there will be new posts up each weekday next week.

Hope all that’s clear, and thank you so much for spending even a few minutes of your precious time with me reading my silly little blog.

OK, on with Good News Friday. Lots to choose from this week, but I want to start with this incredible tale I learned about from the ESPY Awards, ESPN’s annual exercise in self-indulgence and glorification that always still manages to have some awesome moments.

Rob Mendez is a football coach in San Jose, Calif.  He’s the head coach of the junior varsity football team at Prospect High School in San Jose. His team ended the season last with an 8-2 record.

Oh, and Rob was born without arms or legs. Not like that stopped him.

Mendez has become an inspirational figure to his students, and gave an exceptional speech at the ESPYs this week.

“The reality is, I am here and if there’s any message I want to give you guys tonight, is to look at me … when you dedicate yourself to something … and focus on what you can do instead of what you can’t do, you really can go places in this world.”

Really wonderful speech, and an inspiring human being.

this is a phenomenal inauguration pic.twitter.com/pqi96AanS3

**Next up, there was a big ole’ parade in New York City on Wednesday for the U.S. Women’s National Soccer team, who as you know just won the World Cup over in France.

And Megan Rapinoe, who so many of us are in love with these days, gave a rip-roaring speech to a crowd of thousands. It’s a little rambling but it’s sweet and fun and put a big smile on my face.

**And finally today, I always like when stereotypes are completely turned on their head. Check out this winning contestant in the Miss Virginia pageant. According to this great story on OnlyGoodNews.org (hey, shouldn’t I write for them?) 24-year-old Camielle Schrier won the competition after she donned a white coat and rubber gloves for an on-stage science experiment.

That’s so awesome. I so hope she wins Miss America, and then she and Bill Nye the Science Guy get elected President and VP in 2020.

Go Camielle! Check out her experiment performance below.