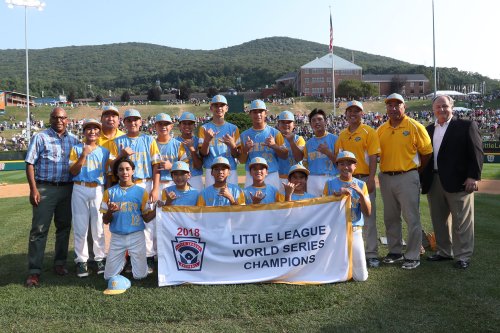 I’m guessing a good 95 percent of you reading this have no idea who Phil Mushnick is, and that’s fine.

Mushnick is the sports media/TV critic for the New York Post, and has been doing the job since Milton Berle was first coming up. Phil is the ultimate, ultimate “get off my lawn” man, hating anything and everything, believing everything today about sports and broadcasting is horrible, terrible, and just so much worse than they used to be.

I read Phil for perverse delight, because I find great humor in his grumpy ramblings. But it occasionally frightens me when I end up agreeing with one of his myriad rants. Which is the case today. For many years Phil has been railing against this issue, and a few times here on this blog I’ve railed about it, too.

This week is the beginning of the Little League World Series. It’s a lovely little event, as a bunch of 12-year-olds from across America and the world compete for a chance to play for a title in the little town of Williamsport, Pa.

It’s sports at its purest, just kids having fun over the summer with their buddies, trying to bring glory to themselves and their hometown. For decades, the tournament to get to Williamsport, and then the actual World Series, were hardly recognized on TV until the title game, when ABC would show it on a Saturday afternoon.

But then of course ESPN got involved, and realized people like to watch the drama of adolescent kids dealing with success and failure and all that.

And slowly, more and more games got televised. And then more, and more, and more. And this year, ESPN breathlessly announced in July, it would be showing 90 regional tournament Little League games on national television, across its various platforms.

Let me say that again; Ninety baseball games involving 11 and 12-year-old children would be broadcast on national television. That’s before the 32 games of the World Series itself, meaning 122 total Little League baseball games.

Children that age do not need to be on television that much. NOBODY needs to watch that many kids on national TV. Putting that kind of spotlight and pressure on these tiny children is just awful, and shameful.

One hundred and twenty-two games. Good Lord. Let the freaking kids be kids.

**So next today, it’s been a long time since I’ve written about a non-Super Bowl commercial in this space, but I saw this Jif peanut butter commercial Tuesday and thought it was strangely subversive and kind of fabulous.

Check this apocalyptic one-minute ad out. I’m a Skippy man, myself, but this commercial almost makes me want to switch.

**Finally, my love for the broadcasting ramblings and diatribes of Bill Walton knows no bounds. The ex-NBA legend has so much fun and creates so much confusion with his bizarre, unfiltered thoughts doing basketball games, I can’t help but want to listen to him more.

Well, the Chicago White Sox, in an inspired bit of promotion, invited the World’s Tallest Deadhead into their booth last Saturday night, to call a baseball game as a color commentator.

It, of course, went spectacularly. Thanks to Jimmy Traina’s always-fabulous SI.com column, here are a few Walton wonders.

First, his completely misreading a harmless fly ball out:

Bill Walton commentating on a routine pop out to left is a delight. 😂 pic.twitter.com/1hGygPDZHt

And then, his astonishment at a bunt single:

Bill Walton is a national treasure. Oh, and on another play with men on first and third and one out, when play by play man Jason Beninati said the Sox were looking for a double play, Walton asked “why not a triple play?”

I love that man.