“Parasite” a strange and very well-made film, and I’m glad I saw it. A very powerful new PSA about gun safety. And the S.C. Dem debate was a wild and crazy affair, with lots of yelling and Biden and Liz doing well. 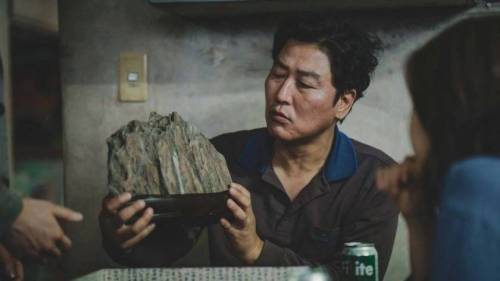 With all the attention it got at the Oscars, the wife and I figured, on a rare opportunity we had last week, to finally see “Parasite.” A foreign-language film that won Best Picture, and seems to be beloved by critics and audiences alike (it has a 99 percent critics fresh rating and a 90 percent audience approval rating), surely was worth seeing.

And you know what? It was pretty freaking good. And strange. And incredibly well-directed and shot. I kind of don’t want to give away too much about it, because we went in pretty blind and were thrilled at the story, but I’ll give some basic details and praise the acting and script.

“Parasite” takes place in South Korea, and focuses on two families: One, the Kim family, poor and living in a awful dwelling in a poor neighborhood, desperate for some opportunity to get out. There’s a mother and father, a sister and a brother, and once the brother (Ki-woo) gets a chance opportunity to be an English tutor to a wealthy teenage girl, he slowly manages to ingratiate his whole family into the life of the Park clan, a wealthy, upper-class couple who have a young, disturbed son, and a teenage daughter.

Indeed, and this is going to sound crazy, this movie reminded me a little of the masterpiece “Fargo,” where the story is compelling, the acting fantastic, and it’s only interrupted by some violence a few times.

As the two families’ lives get more and more intertwined, director Bong Joon-Ho gives us a ton to think about, with metaphors about class distinctions, human behavior, and even some pretty funny scenes, too.

There was a little weirdness in the movie, for sure, and a hilarious scene where the Kim’s try to stop a vagrant from peeing on their little dwelling.

But overall this was a movie that had my jaw on the floor at the end; it was really, really good. Not surprised at all it won Best Picture, and I highly recommend it.

**Next up today, a pretty remarkable public-service announcement from a group called End Family Fire, designed to raise awareness and help prevent gun violence in the home.

Watch this two-minute video of a father talking to his young son; well, actually, it’s the son talking to the father, and watch the little guy take on all arguments against the father’s gun safety notions and turn them back on him.

This is really a tremendous piece of work; here’s their website if you wanted to get involved.

**And finally today, a few words on Tuesday night’s Democratic debate, where everyone on stage should’ve had one goal, for their own survival: Slow down the old Jewish guy from Brooklyn, aka Bernie Sanders:

The debate was, well, entertaining in a train-wreck, family gathering at Thanksgiving where everyone yells at teach other kind of way. The moderators at CBS, Gayle King and Norah O’Donnell, did a miserable job keeping things on track and under control, just awful. The crowd was out of control; why exactly do we need crowds at debates?

We had way too many screaming interruptions that no one could hear. And the last question, about mottos, was just silly.

Still, in between the shouting and interrupting, there was some substantive stuff talked about.

— First, I’m very surprised the attacks on Sanders seemed to stop after the first 15 minutes. He’s the frontrunner, he’s got the most momentum, and if you’re the other candidates, you need to slow his roll. But after Biden and Warren both jabbed at him a bit, there really wasn’t a lot of attacks on Bernie. Biden went after him a little on guns, Mayor Pete on Russia, but I thought there’d be more. I was surprised.

— The math is simple if you support anyone but Sanders heading into South Carolina: Joe Biden must win South Carolina, no ifs, ands or buts about it. If Biden does (and his recent speech where he said he’s running for the U.S. Senate shows he’s clearly, mentally, having trouble) then Sanders’ momentum is stopped, and Super Tuesday is up for grabs among a lot of candidates, including (sadly) Bloomberg.

But if Bernie wins S.C., well, the fat lady will be warming up her pipes. So if you’re a Warren supporter like me, it’s go, Joe, go.

— I thought Biden did pretty well, although he came off nasty when constantly chastised the moderators for cutting him off. He also made some wild-sounding claims, including saying something like half the population has been killed by gun violence.

— Kind of entertaining that Pete Buttigieg was up there decrying 1960s-style radicalism when he was born in the 1980s.

— I once again question why in the world Steyer is up on stage, when he impresses me not one bit. What an absolute waste of millions of dollars by him.

— I predict Biden will squeak out a win in South Carolina, and Warren absolutely, positively has to at least finish in the Top 3.