The thrill of a live hockey game. And the new airline rules that will bother us 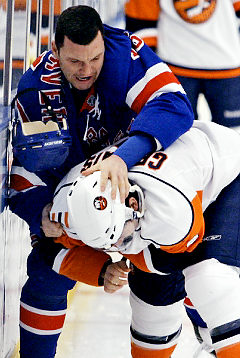 People have often asked me what’s my favorite sport. I answer tennis or hockey or football, depending on my mood.
But when they ask me what’s the best sport to watch live, there’s not even a split-second hesitation in my answer.

Hockey, without a doubt, is the winner for “biggest improvement from seeing it on TV to being at the game.”

Last night Julie and I went to the Rangers-Islanders game at Madison Square Garden, my favorite arena on Earth, to watch one of the great rivalries in sports. It reminded me of just how much damn fun a live hockey game is.

You see the speed, size and skill of the players so much better in person. On TV, you can’t appreciate the breathtaking rushes up the ice by a Marian Gaborik or a John Tavares, and watch the beautiful choreography of a play developing into a big-time scoring chance. The ferocity of the body-checks by Dan Girardi or Sean Avery is lost when you’re sitting at home, too.

But most of all, a hockey crowd is just so intense and fun. We were sitting in Section 310 last night, which, thankfully, was a Rangers-dominated fan section (at Islander-Ranger games, there are always a lot of opposing team’s fans in the other’s building).  It was awesome listening to the 10-year-old behind us call the refs “a bunch of idiots.”  The brilliantly thought-provoking and penetrating men’s room line conversation can’t be beat (“Islanders suck.” “Rangers suck.” No, Islanders suck.” Really, it was like Masterpiece Theater in there.)

It was so much fun getting swept up in the collective “oohs” and “ahhs” of scoring chances that just missed. We booed, we cheered, and we saw a thrilling game that had the Islanders (sadly) winning in overtime.

I know hockey doesn’t get a lot of love in America. And I know the zealots like me, the people who worship the sport, are always saying “Just go to one game, and you’ll love it forever.”

But really, it’s true. Live hockey is an incredible experience that will turn you onto the sport. If you get a chance, just give it a shot.

And the kid was right: Those refs really were idiots.

**So after that Nigerian guy tried to blow up  the plane in Detroit the other day, it was so predictable that the airlines would immediately react like a scared little kid and make up a whole bunch of new rules. Apparently, according to this article, you now must sit in your seat with nothing on your lap or tray-table, and stay seated, for the final hour of international flights, and longer lines await you at security on all flights.

As Bill Maher and others always say, we’re always fighting the previous battle with airline security. After the shoe-bomber failed, we all had to take off our shoes. Now this guy fails, and we have to stay seated. Here’s the thing: The Nigerian guy WAS seated! He didn’t need to get up.

I just always feel like we’re fighting a hopeless battle against would-be airline bombers. No matter what we try to do, no security measures will ever be 100-percent, guaranteed effective. There will always be that risk.

So, fine, make me take my shoes off, keep me seated, while I hum the Battle Hymn of the Republic in my head. Fine. Whatever.

Just don’t take away my bag of peanuts. A man needs salty goodness to keep his sanity on flights these days.