Billie Jean King, a true American hero. The joy of tipping a waitress $200. And how far Rocky Balboa really ran in “Rocky II” 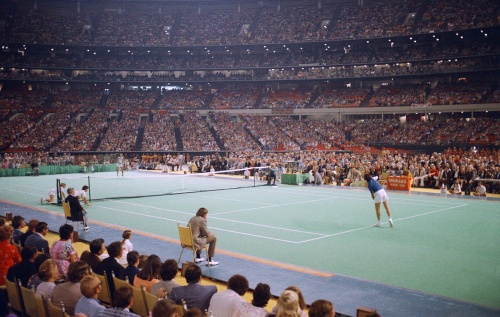 Billie Jean King is one of the most important figures of the 20th century, and I really don’t think that’s an exaggeration.

She’s one of the 10 greatest tennis players of all time, but that’s almost secondary to why she’s so important.

King c0-founded the women’s pro tennis tour, and was a driving force in the feminism movement overall in the 1970s, and beyond. She was out front on every major women’s battle, in sports and otherwise, and showed guts and courage that few others did back then.
The National Tennis Center in New York, where the U.S. Open is held, bears her name, and it’s likely that no one has done more to further the awesome sport of tennis more than King.

Billie Jean has long been a hero of mine (I was lucky enough to interview her twice in my journalism career, and she was as friendly and intelligent as she has always seemed), and it bugs me that she sometimes gets forgotten when the list of trailblazing women get discussed.

But lately she’s been everywhere, and for good reason: Friday is the 40th anniversary of the famous King-Riggs “Battle of the Sexes” match (seen above), which psychologically did so much for the women’s equal rights movement in America.
If you somehow don’t know what I”m talking about, or are too young to know what it was, Bobby Riggs was a former top tennis player who, by 1973, was just a 55-year-old, washed-up showman.

Reading the culture of the moment, Riggs decided to put on a persona as a male chauvinist, and challenged King and the world’ No. 1 player at the time, Margaret Court, to play him in tennis.
King said no, but Court agreed. And then got waxed by Riggs, 6-2, 6-1.
After that, King knew she had to play Riggs, and their match was a spectacle like sports had never seen before.
What was at stake? Plenty. But King destroyed Riggs in straight sets, which countless women over the years, from Hillary Clinton to Gloria Steinem to average women on the street, have said was a major blow for equality at the time. (There was a high-profile story by ESPN writer Don Van Natta Jr. recently that alleges Riggs lost the match on purpose to settle gambling debts. It’s a fascinating tale, but I don’t buy it.)
Following her tennis career, King was outed as a lesbian by a former lover, and become a major champion of gay rights for the past 30 years.

PBS’ fabulous “American Masters” show has a new documentary out about King, and I watched it the other night: Truly great stuff.  She’s a pioneer who battled against the system time after time, and never stopped fighting.

I think the 40th anniversary of her beating Riggs is a wonderful time to acknowledge her; the PBS documentary will be airing all month on PBS stations, but the entire show is here on PBS’ website.

**Next up on Good News Friday, this was really sweet: Two guys named Stuart and Andrew had heard that waiters in Utah make only $2.13 an hour in salary, with the rest made up in tips (sounds impossible, but true).

So they found a few good waiters and wanted to see what the reaction would be if they left them $200 tips.

The expression on the woman’s face near the end is priceless.

**Finally today, not sure this qualifies as “good news” but it made me smile since it’s about one of my favorite movie scenes of all time, the final running scene in “Rocky II,” when our boy Rocky Balboa sprints through the streets of Philadelphia while every kid in the city runs behind him.

A blogger at Philly Magazine decided to figure out just how far Rocky ran, if it was a real training run. The answer? Like 30 miles! Check out the explanation here; I thought it was hilarious.

A historic sports anniversary goes sadly unnoticed by most. An unfortunate intern injury. I am outraged by the Troy Davis case

One of the most important anniversaries in sports was Tuesday, Sept. 20.
It’s an anniversary I feel particularly strongly about, because I have met the woman involved several times and found her to be one of the classiest, most heartfelt people I’ve ever met.
On Sept. 20, 1973, Billie Jean King defeated Bobby Riggs in a tennis match that was kind of like a day at the circus. It was played at the Houston Astrodome, where 45,000 people attended, and to say it was a hugely important day for women’s rights, and women’s athletes, is an understatement.
It’s easy to look back now and marvel at how it was such a big deal that 29-year-old woman in her athletic prime could whip a 55-year-old man on the court. (And I love the cheesy commercial above, which I found randomly on YouTube. God bless the Internet).
But it was a big deal. There were plenty of people back then who didn’t think King would win. But she did, easily.
Like I said, I’ve had the privilege of interviewing King a few times over the years, and she was nothing but gracious, eloquent, and kind. I would make the argument that she was the most influential female athlete/leader of the 20th century, and thanks to her millions more women were treated as serious athletes as the 20th century’s final decades rolled on.
So 38 years later, every female athlete playing today owes a small debt to Billie Jean King, truly a legend of our time.

**Here’s what can happen when you’re on the field at an NFL game. This poor intern for the New York Giants, Ryan Brown, was standing behind the end zone, minding his own business Monday night, when Giant Michael Boley scored a TD and tried to throw the ball over the cameraman. And he, eh, showed why he’s not a QB: (Boley later apologized to the kid).

**Maybe you’re familiar with the case of Troy Davis, a Georgia man sentenced to the death penalty and scheduled to be executed on Wednesday.

Despite there being literally NO physical evidence, despite seven of nine eyewitnesses re-canting their testimony against him, despite there being NO evidence of any crime being committed against police officer Mark MacPhail in Savannah, Ga., in 1989, the state parole board denied Mr. Davis clemency on Tuesday.

This is the country we live in. This is what happens when you have an irreversible act like the death penalty as an option.

The state of Georgia is about to execute a man who is very likely innocent. And the blood on the hands of everyone involved should leave a permanent stain.
Meanwhile, Rick Perry and his “fans” are probably standing and cheering right now.