8-year-old under arrest, an incredible hitting streak goes on, and R.I.P. Dennis Hopper

Sometimes the absurdity of a story speaks for itself. So I’m not going to comment on this one:

An argument over a toy airplane led Monday to an eight-year-old Ohio boy being cited for assaulting a six-year-old neighbor, according to cops. Witnesses described the child as a bully who frequently picked on younger kids, according to the below Lorain Police Department report.

Sigh. I hate bullies as much as anyone, but bringing the cops in to arrest an 8-year-old is insane. 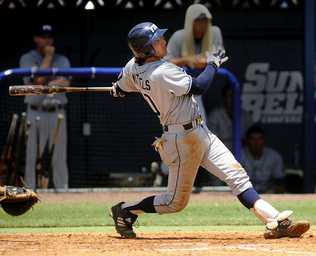 But have you seen what this kid named Garrett Wittels, of Florida International University, has been doing the past two months? Witters got a hit Saturday for FIU, and has now hit in 53 consecutive ballgames.

Fifty-three! That’s the second-longest streak in NCAA Division I history, second only to Robin Ventura (ah, a sweet memory for Mets fans), who hit in 58 straight games.

Amazing story for the sophomore infielder from Miami. I hope he breaks the record; it’s so difficult to maintain that kind of consistency for a whole season.

**And finally, a quick tribute to one of the greatest American actors of the 20th century, Dennis Hopper. Loved him in almost all of his roles, from “Apocalypse Now” to “Easy Rider” to “Hoosiers” and “Speed.”