Something old and something new coming in the Super Bowl, as the Patriots and Eagles advance. And this government shutdown is inexplicable, in many ways

The mindset of a Philadelphia Eagles fan, in one text exchange from me to my friend Dave M., a longtime Eagles supporter, when the score of the NFC Championship game Sunday was 31-7, Eagles, in the fourth quarter:

Yes, even up 24 points in a game that was pretty much un-blowable at that point, Eagles fans were still nervous. And I totally get that as a Jets fan.

But happily for the sanity of most of Pennsylvania, the franchise of Chuck Bednarik, Harold Carmichael and Reggie White did not blow it, and so we’ve got one heck of an interesting Super Bowl.

Oh sure, it would’ve been nice to see someone besides New England come out of the AFC, because we all hate them so damn much. But even though Jacksonville’s fantastic road effort fell short, I think this will be a fascinating Super Bowl. Is it Tom Brady and Bill Belichick’s last hurrah? Can the ferocious Eagles defense disrupt things? Will Nick Foles remember he’s, um, Nick Foles and come back to Earth?

Should be a really fun game.

Some other thoughts from NFL Championship Sunday…

— I feel really badly for Vikings fans; would’ve been so much fun to see a home team finally host a Super Bowl in its own stadium. And after last week’s miracle win it sure seemed like they were destined to go all the way. But they got totally outplayed, and Case Keenum finally looked like the backup QB he’s been all his life. But they had one hell of a season.

— I can’t believe that was the same Nick Foles on Sunday who could barely complete a pass against the Raiders back in December. This guy looked like Joe Montana Sunday, throwing beautiful deep passes and being so accurate on the short ones. Carson Wentz couldn’t have done it better.

— Even up 20-10 in the fourth quarter, I never thought the Jaguars were going to win Sunday. The Patriots have done it for so long, and so well, that I truly never thought they were in danger. Jacksonville, though, what a hell of a future that team seems to have. So many young, fast guys on defense, a stud running back, and a quarterback, Blake Bortles, who maybe has finally turned the corner and is going to be good.

As soon as the whistle blew here in San Diego, we had some good news for @julieertz…💚🦅@ZERTZ_86 & the @Eagles are heading to the @SuperBowl! pic.twitter.com/dI5MvG53VR

— I thought this was really sweet: The wife of Eagles tight end Zach Ertz, Julie Johnston Ertz, is a U.S. Women’s National Team player. They played Sunday and apparently she didn’t know the outcome of the football game. She found out right after the final whistle, and this was her fantastic reaction.

**So, I gotta admit, I really and truly didn’t think a party that controls all three branches of the federal government would be stupid enough to actually shut the whole thing down. I mean, when you control everything,

But ya know, you gotta hand it to the Republican Party. Not only do they allow millions of federal workers to be off from work Monday, but they have the gall, the chutzpah, the effrontery to blame the shutdown on the Democrats. And the New York Times, bless their beautiful hearts that I love, actually ran headlines Friday night saying “Senate Democrats block bill to keep government open past midnight” when only 45 Republicans were on board for a short-term resolution?

This is, in reality, the first time EVER that a party that controlled the White House, the Senate and the House had endured a government shutdown. So hey, one more thing that’s never happened before, happening under Trump! Whoo-hoo.

So the government shutdown happened, because chaos is the only thing Trump and the GOP are good at. And people’s livelihoods are at stake, and paychecks will be lost, and hardship will be endured, while Mitch, Paul and Donnie boy sit back and blame everyone but themselves.

Democrats like Schumer and Booker and the rest: Hold firm on DACA. Do NOT capitulate to bullies and tyrants.

The other big news over the weekend was the Women’s March, which saw millions take to the streets from New York to L.A., from Atlanta to Seattle, and points in between. 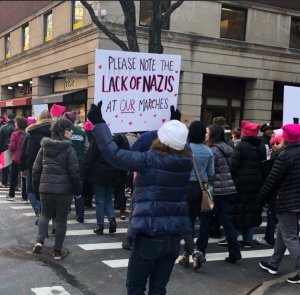 It was very impressive to once again see a huge turnout, and if you are wondering “Well, what difference does it make if they march?” I say: A big difference. If these women (and there were men marchers too) become more politically active this year because of this march; if they register their neighbors to vote, or work on behalf of a candidate they’d previously never considered, or simply become a more informed citizen of the political process, then the march absolutely has made a difference.

More power to the people!