The U.S. Olympic hockey team gives us our first awesome Sochi memory. Ellen Page eloquently comes out. And a crazy half-court shot by a college student 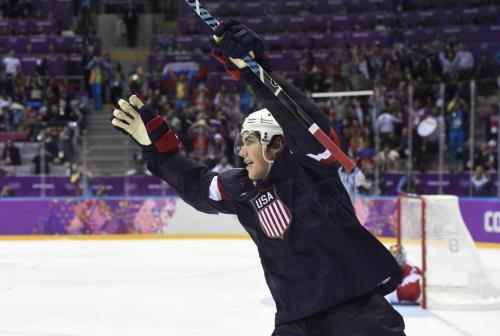 Through the first week of competition, the Olympics haven’t given you too much to cheer about if you primarily root for Team USA.

Oh, we had a couple snowboarding gold medals, and some decent performances in figure skating, but by the by, the red white and blue have kinda disappointed.

Shaun White? Nothing. Shani Davis? No medals there. And Bode Miller? Until Sunday, he was a non-factor too.

We were looking for that first “Olympics” moment, us American fans were.  And Saturday morning, we got it.

A day and a half later, I’m still shaking my head over what I saw. USA 3, Russia 2, in as crazy and strange and thrilling a shootout as you’ll ever see.

First things first: I’m an enormous hockey fan, which you know. I love the shootout and defend it against many others when it comes to its use in the NHL regular season. But I would never in a million years end a Stanley Cup playoff game, or an Olympics game, with it. It’s a gimmick and not remotely close to “real hockey,” but the NHL regular season is such a grind that I like it there, it breaks up the monotony and is super-fun to watch.

But it shouldn’t be used in an Olympics, which is so rare and special as to happen once every four years.

Saturday’s game, all 65 minutes of it, was marvelous. The Russian crowd was going nuts, there was some controversy over a disallowed goal (a legit call by the refs, but a ballsy one to make in that situation), and the quality of play was fabulous.

And then… the shootout. As crazy as it was to decide this game that way, the international rules allowing the same player to shoot over and over after the first three are done is also insane.

But it sure was fun to watch T.J. Oshie and Russia’s Ilya Kovalchuk basically play one on one for a few minutes against two outstanding goalies. Oshie was like a magician out there; I thought for sure he was going to pull a puck out of his helmet or something. What a marvelous display of skill he put on.

It was a spectacular game, and I’m glad I got to see it. There’s been some backlash since about how overblown the media has been about this game, comparing it to 1980’s Miracle on ice, etc.

Of course those comparisons are absurd; that was for a gold medal against an indomitable powerhouse in the middle of the Cold War. This was a prelim game in 2014 matching two pretty equally-matched teams.

Still, it was thrilling to watch. And I can’t wait for this week’s hockey games, because they ought to be even better.

For the best take on Saturday’s game, I recommend the great SI writer Michael Farber, who wrote here.

**Next up, this was rocketing around the Internet this weekend, and for good reason. The actress Ellen Page, best known for starring in “Juno” (a fabulous movie, if you haven’t seen it), was scheduled to speak at a Human Rights campaign LGBT conference on Friday.

Her speech turned into a coming out of the closet for Page, but that’s almost incidental. Her words are so beautiful, and so poised, here. What a brave, wonderful speech.

**Finally today, a student at West Chester University in Pennsylvania had to make a layup, a free throw, a 3-pointer and a half-court shot in 30 seconds to win $10,000.

No problem. But watch the way he hits the half-court shot; truly amazing.