Irene slams N.C. and N.J., but leaves us New Yorkers pretty OK. The MLK speech turns 48. And “Curb” gives us a holy trinity of guest stars 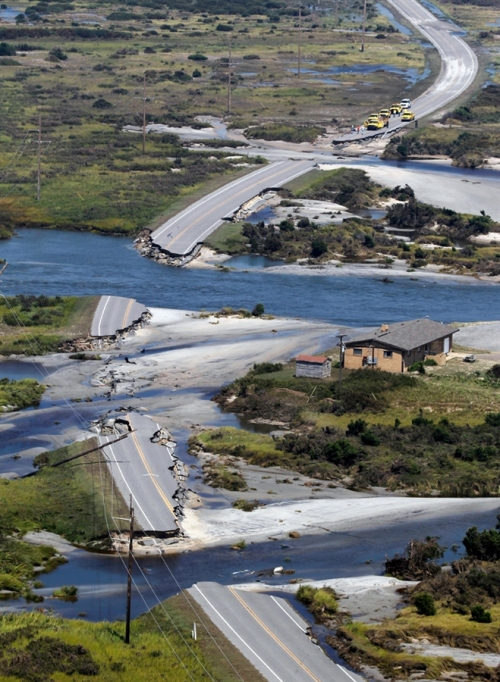 And so Hurricane Irene has come and gone, leaving destruction in its wake from North Carolina all the way up the coast.
New Jersey is mostly flooded. Millions of people are without power in their homes.  And good luck driving in Vermont, where so much of the state is under water.
So don’t let anyone tell you this storm was overhyped. No, it wasn’t as bad as it could’ve been. But it still was devastating.
Fortunately, my fellow NYC brethren and I got off reasonably OK. My neighborhood in Queens had some downed trees, and fortunately my basement apartment stayed un-flooded.
Some other scattered thoughts from my brain after 48 hours of all Irene, all the time:
— CNN showed some “geniuses” on their boats in Newport, R.I. before the storm, and one father was saying how safe it was on the boat, and that even though it was a mandatory evacuation area he was staying put. And his 11-year-old son was right there smiling and nodding, too.
That father should’ve been arrested for child abuse on the spot.
—  Can someone explain to me how Mayor Michael Bloomberg of New York can still have a Boston accent after 10 years as the mayor here? He still sounds like Mikey from Worcester.
— Had never been woken up out of a deep sleep before Sunday morning. But damn at 3 a.m. it was howling outside.
— I know its easy to bash the TV networks for overhyping Irene, and sure I think its goofy that they make those reporters stand out there on the beach in 100 miles per hour wind. But honestly, no sarcasm intended, I thought TV did a really good job covering this storm.
— That’s a picture of Cape Hatteras, N.C. from Sunday. Tell those people the storm was overhyped.

**Sunday was the 48th anniversary of Dr. Martin Luther King Jr.’s famous speech, “I Have A Dream.”
One of the greatest oratories of all time. Enjoy:

**Finally, another pretty solid “Curb Your Enthusiasm” was on Sunday. Not nearly as good as some of the other ones this season (last week’s “juicing” episode was an all-time classic), but Sunday brought the most awesome guest starring trio ever.

It was: Tony Soprano’s sister (Aida Turturro),  Miles Silverberg from the late, great “Murphy Brown” (Grant Shaud), and the awesome Max Medina from “Gilmore Girls!”(Scott Cohen). For you Gilmore fans, here’s a link to the Max proposal (an awesome scene) and the Lorelai acceptance (also a great scene)
Three totally random but awesome actors in one tiny little Curb episode. Awesome. And now a classic scene I just found on Youtube featuring Aida Turturro and James Gandolfini; watch the slow burn on her face around the 2:10 mark.
God that was a great show.