Good News Friday: Oklahoma releases hundreds on non-violent inmates in one day, and it’s a welcome breath of change.An 11-year-old’s birthday party was attended by no one. But wait, it had a happy ending. And a Halloween trick or treater does an awesome, generous thing 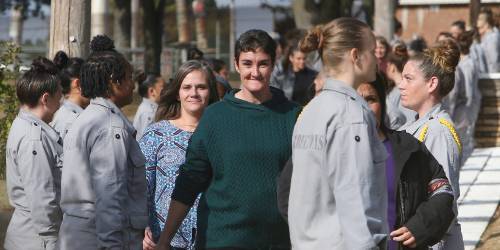 And a Happy Friday, my fellow humans who can read! It’s getting chilly and darker earlier here in New York, which does not make me happy, but soon I’ll get to wear my heavy Stance NBA player socks which I love so much so that does make me happy.

Lots of good news to get to today, not even including the a-hole governor of Kentucky, Matt Bevin, losing his election on Tuesday.

First, a wonderful criminal justice development, that I hope will be replicated many times over, took place this week.

In Oklahoma on Monday, more than 450 prison inmates, behind bars for low-level and non-violent charges were released across the state.

According to this NPR story, “it’s believed these commutations mark the most prisoner releases on a single day in the history of the U.S. — the nation with the highest incarceration rate in the world.

Steve Bickley, executive director for the state’s Pardon and Parole Board, oversaw the emotional, “memorable” release.

“When you see people reunited with their family and moms getting to hug their daughters, and parents hugging their children,” he says. “Sometimes there wasn’t a dry eye around.”

Oklahoma has the second-highest incarceration rate of any state in the U.S., and it was a Republican governor, Kevin Stitt, who campaigned on a promise of reducing the prison population in Oklahoma. Stitt has formed a task force to continue criminal justice reform in the state, Bickley says.

To help people who are released transition back into society, the state Department of Corrections held their first-ever transition fairs at 28 facilities. Nonprofits came into the prisons to share information about services they offer including housing, transportation, jobs and more.

The state also brought inmates set for release to the Department of Public Safety to get a driver’s license or state-issued ID.

This is such a huge step. There are many parts of our criminal justice system that need reform, but housing millions of non-violent offenders for years and years due to either draconian sentencing laws, or simple cruelty, or a governor trying to look “tough on crime,” is one big problem.

“I think what is really monumental about what just took place is it was a first step,” he says. “And overwhelmingly, everyone said it was the right step. And I think we can build upon that. And I think it’ll create more momentum for more criminal justice reform in Oklahoma.”

Yes, yes, yes! I hope other states follow Oklahoma’s lead, which is not a sentence I get to write very often.

Fewer prisoners, and more people re-integrated into society and given a chance at leading a good life again, is a GOOD thing.

SAVING HALLOWEEN: Little Dracula Jackson Champagne was trick or treating in Maryland when he got to a house that had run out of candy, reaching into his own bag to make sure the next child had a treat waiting. @davidmuir reports. https://t.co/TDwDxCOgJg #AmericaStrong pic.twitter.com/N9UVH1fJs4

**Next up today, you may have seen this video go viral the day after Halloween, and I love it.
A boy named Jackson Champagne (seriously, that’s his name) was trick or treating in suburban Maryland when he came upon a house that had left a candy bowl out for kids.

After seeing the candy bowl was empty, he started taking sweets out of his own supply and putting in there.

It was all captured by the homeowners’ NEST camera. Really sweet stuff, Jackson. 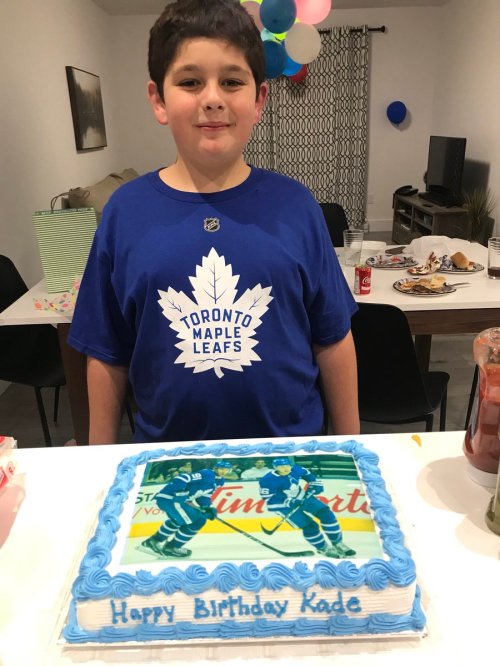 **Finally today, I sort of hate that these stories have to exist, because they don’t start out happy, but get there at the end.

An 11-year-old Toronto kid named Kade Foster was having a birthday party last week, complete with that awesome Toronto Maple Leafs cake (above). But sadly as sometimes happens, according to his Dad Jason, none of the invited guests showed up.

So Jason Foster put it out on Twitter that his son is a huge Leafs fan, and maybe some of the stars of the team like Auston Matthews and Mitch Marner could send a message to Kade.

Well, Kade got THOUSANDS of messages, from the two Leafs players, from other celebrities like Zach Braff and Dog the Bounty Hunter (no way those two have ever been in the same sentence) and apparently the Leafs are planning a surprise party for Kade in the near future.

From Jason Foster: “We can’t comprehend what has happened today. Kade and the rest of us are just amazed. To EVERYONE who sent Kade a message – thank you from the bottom of our hearts. He is an amazing son and he will never forget this day.”

So much good in the world. So much.